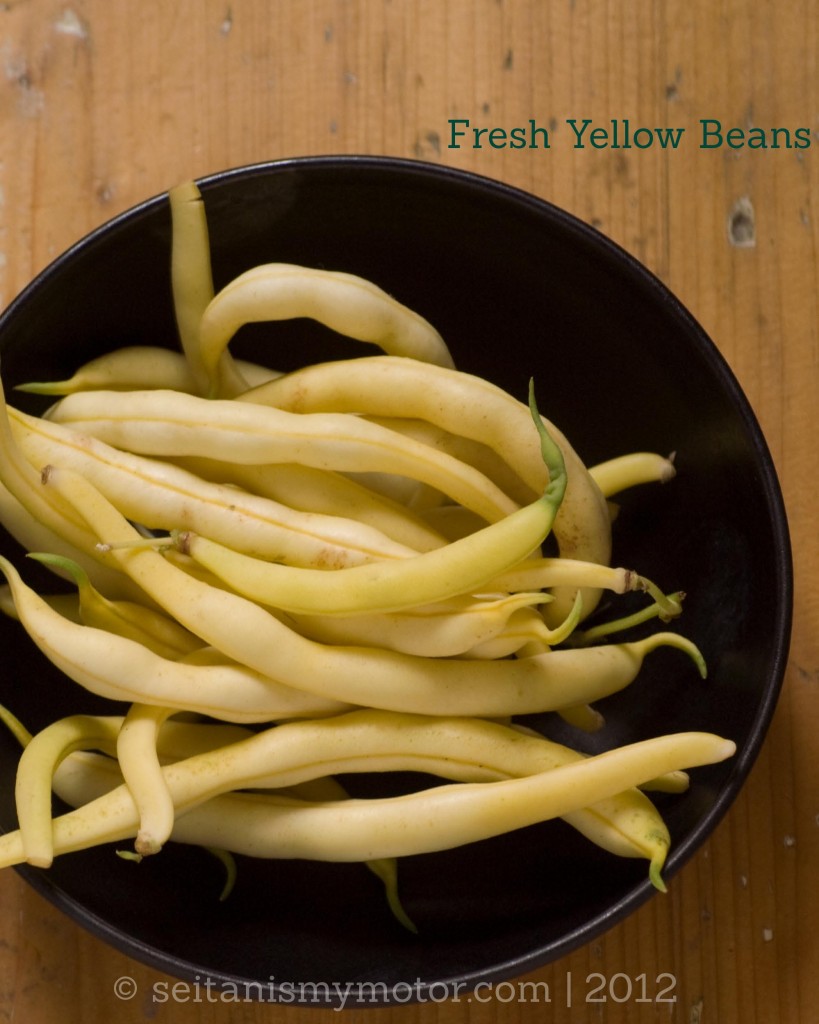 Having this little blog for a while has been fantastic in many ways. People read my blog and ask me about recipes or talk to me about food. I already mentioned my neighbour who gives us fresh produce from her garden on a regular basis. She just rings the bell and hands me a bag with vegetables. No matter what it is, she says :”You know what to do with it.” She’s an old lady who grew up in Eastern Germany. Having a huge garden was a big help at that time and even though she doesn’t have to support a family any longer, she still maintains her garden and loves to experiment with all kinds of plants and seeds. Even though she’s not in best health anymore, she still takes good care of her produce every day, harvests it, prepares it, cans or freezes it and gives some of it away. Today she came down to give us a huge bag of fresh yellow beans. She handed it to P. when he opened the door and said as usual:  “Your wife will know what to do with it.”

And in fact I did. We didn’t have anything planned for lunch. P. had bought a bag of fresh peas and wanted to cook something with them. But I was faster and had already begun to prepare the beans. He offered to prepare the peas, so we could use them in the same dish. 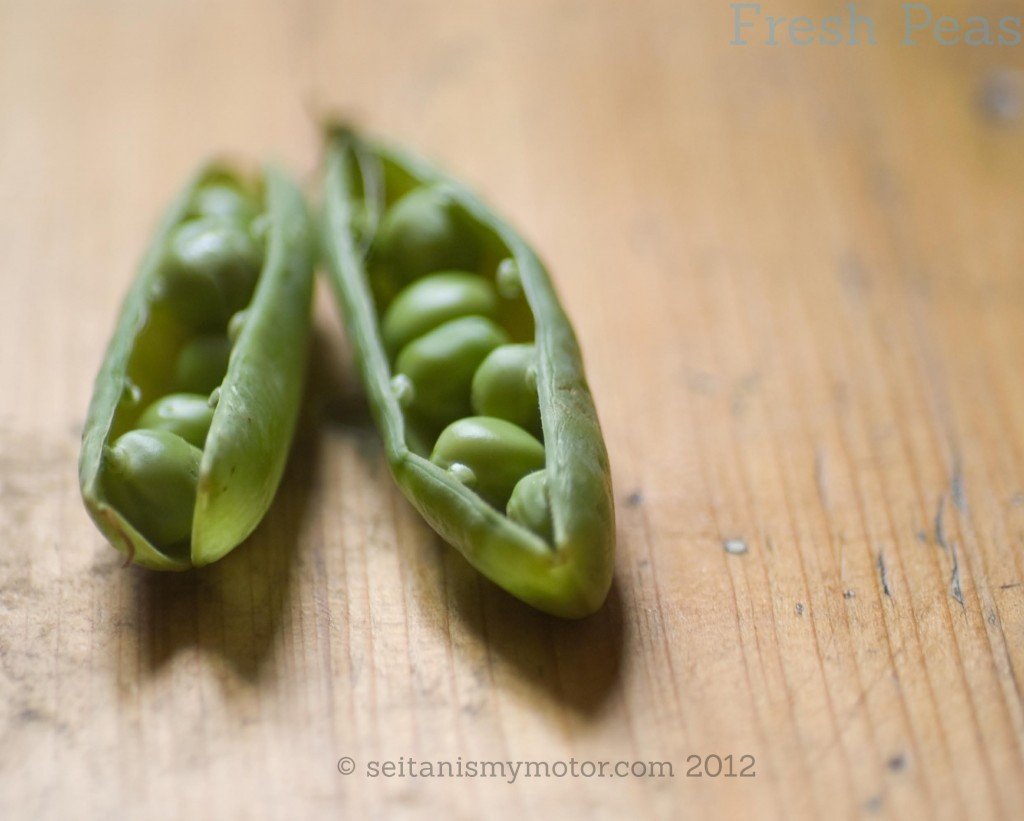 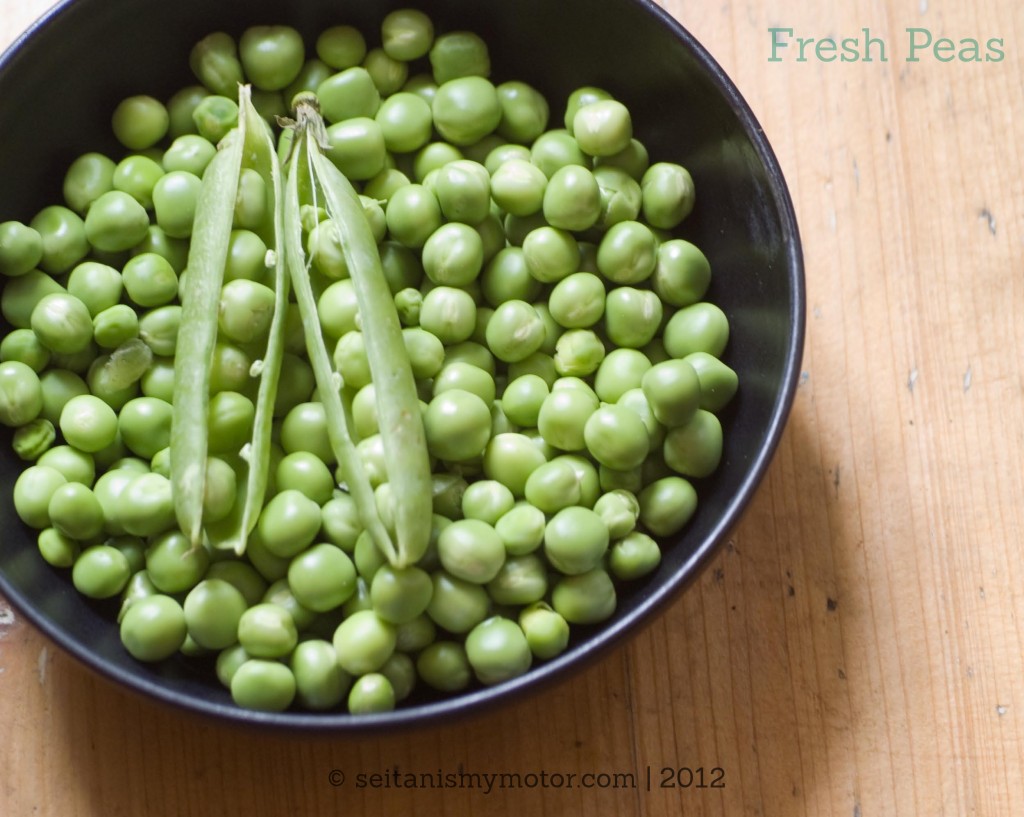 I immediately thought of a curry because they are so easy and flexible and you can just throw in any kind of vegetable. Which brings me to my next story. P. has an aunt who also makes me food presents on a regular basis. I think it all started when she and her husband visited us for the first time and she saw my (huge) spice rack. “Oh, wow, that looks exactly like mine. You have so many spices.” I thought that was a huge compliment. She grew up in India and Nepal and when she met her husband, she moved to a small German village. Of course the eating habits there were very different from what she was used to: “Lots of meat and no spices except for salt and pepper.” When she told me this story, I had to laugh because of course it is true. I grew up in this kind of German village. My spice rack improved a lot when I first moved to a large city  and so did my curiosity and my cooking skills.

The first years in Germany she had a hard time to find the spices and herbs she was used to. Even though it got a lot better these last few years, she still brings home a lot of stuff whenever she visits her former home countries. She knows how much I love Indian food, and learning about food and cooking in general.  The last time we visited them, she showed me a little room next to the kitchen, filled with all kinds of kitchen utensils and lots of spices. She gave me huge chunks of Himalaya salt and told me how to use it: “Place it in a jar with water and use the liquid to season your dishes.” (That was good advice. I had thought about using a hammer.) She also gave me a huge bag of turmeric. 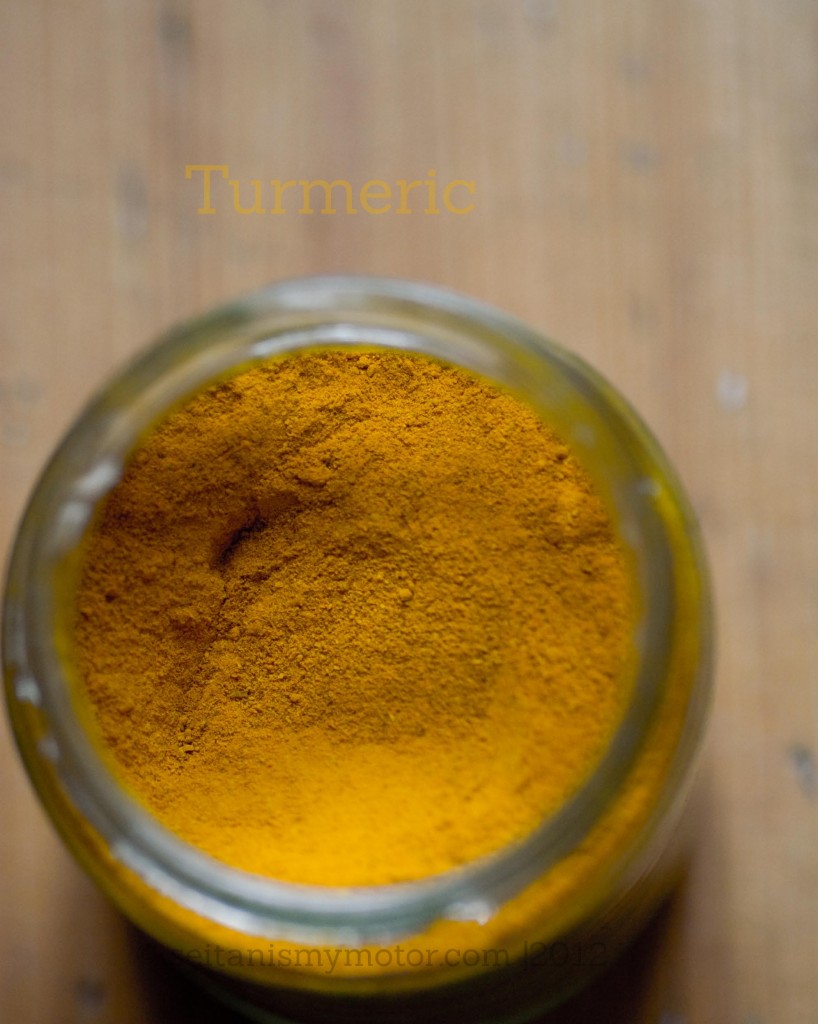 She and her husband always buy this spice from the same farmer in India. She told me a bit about him and his life and I almost couldn’t believe that she would share this special ingredient with me. (I think it also helped that P. is one of her favourite nephews.) But it got even better. She gave me the most amazing garam masala I have ever seen and tasted. She handed me the whole spices and told me how to use them. She explained that I should always grind them right before cooking and stir the powdered mix in when the dish was already done, to preserve the flavour. I am so thankful for her advice, because this makes such a difference! Plus, her garam masala blend taste so much better than the store bought stuff I was used to. It is made with cinnamon, black pepper, long pepper, mace, cloves and green and black cardamom. I tried to use this sparingly but it tastes so good, especially because of the cardamom! I guess I need to visit P.’s aunt again and beg for another jar. 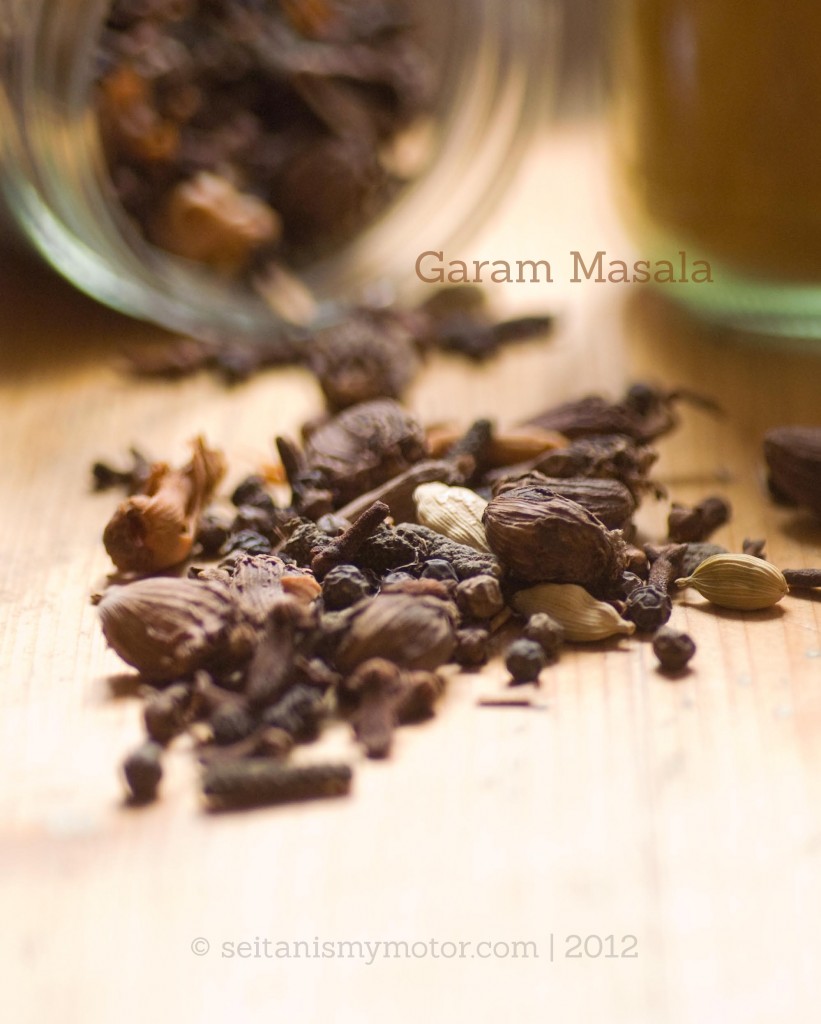 I am not an expert when it comes to Indian cooking. I usually just throw some spices together and call it a curry. I know that is not very decent and I hope you will forgive me. I don’t mind if you adjust this dish to your taste. For example, for a creamier version you could use coconut milk instead of the water called for. Or throw in some more chillies or fresh ginger to add more spiciness (F. loves curries, but she doesn’t like heat yet. I am impressed that a 10 month old would eat this in the first place, I read so much stuff on how small children like everything basically bland. Well, F. cannot read yet. She totally refused to eat her unseasoned potato, carrot and chickpea mash. She ignored the advice directed at her and ate all the peas with lots of spices. 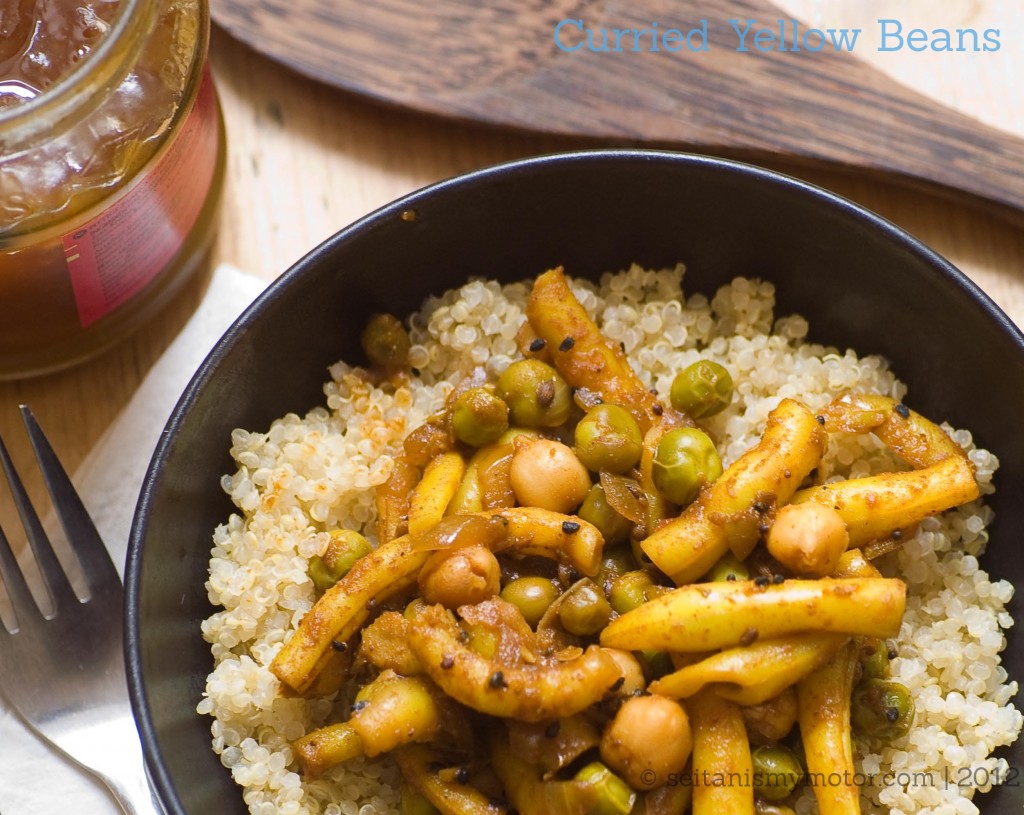 Heat a large cast iron pan over high heat. Add cloves, chilli, mustard, coriander, and cumin. Roast for one minute and remove from heat. (Make sure to move the pan all the time and remove earlier, if the spices start to burn.) Pour spices into a little (heat proof) bowl and place the pan on the stove again. Lower heat to medium. Add oil, onion and garlic and fry until the onion is translucent. Add peas, beans, water, tomato paste, turmeric, cumin powder, nigella and the roasted spices. Cook covered for 20 minutes or until the beans are tender. Check from time to time and add more water if necessary. Stir in chickpeas and garam masala and remove from heat. Season with salt and pepper. Serve over rice or quinoa.

Can we possibly maybe exchange neighbors?

Beautiful photos and a beautiful post!
At 8:30am, this totally makes me hungry for dinner tonight. :)

when I was growing up it was the same – there was a spice wrack but the spices were all about 20 yrs old I think; I reckon it was bought for my parents as wedding gift. I got into cooking when I left home through being introduced to Indian food by friends I met at University. It was the uses of spices that intrigued me. Now we go to India at least 3 months a year and I realise you can never stop learning about spice variations in that country. Take Garam Masala as an example; so many regional differences in the mix..fantastic!

Agreed. Children should not be treated like senseless imbeciles, but like blank slates that need only a bit of guidance. I’m so glad you’re raising your daughter to enjoy real, flavorful food! You could write a book on it someday for the rest of us. ;)

Ha ha! Hannah wants you to treat your daughter like a block of tofu. That’s actually pretty good advice. Except you probably had a little more flavor that plain tofu.

I am intrigued by the “long pepper” in your garam masala…

I meant, you daughter probably has a little more flavor than a block of plain tofu.

I plan to marinate her for better flavour.

hi Mihl- I just wanted to let you know that I finally made your vegan tiramisu from, like, two years ago. I love love loved it. Very clever and delicious; unfortunately mine didn’t firm up quite like your version- variations in soy yogurt brands, perhaps. (The comments were closed on that post… but these peas look delicious too, heh!)

Hi Andrea, sorry that happened. Going to email you soon!

That garam masala looks beautiful – I can only imagine how amazing it must taste compared to pre-ground spice mixes. I loved reading the stories about your neighbour and P’s aunt, and I love that F. appreciates your cooking so much already!

Spectacular photos and great-looking curry. I think the people who tell you children prefer plain food are not very adventurous cooks! My children ate all the same foods we did, with enthusiasm.

That’s a good point. I am glad that she’s already so fond of our cooking. I hope it stays that way.

Yum. I have a bag of yellow beans in my fridge just staring at me….perfect! I always season Simone’s food, I figure if I don’t like it bland why would she. Besides its important to develop there taste buds :)

That is so true! I thought the same. Why would anyone like bland food?

Zucchini Soup with Tahini and Mint

The Best Way to Prepare Millet