There’s a question vegans are asked all the time. It doesn’t come alone, it is usually paired with “But where do you get your protein?” The question I am talking about here is either called “But what can you eat?” or “But what do you eat all day?” I know that people don’t want to annoy or tease me with that question. They just cannot imagine what you can eat when you’ve eliminated some foods from your diet, which are very important staples to most people around you. 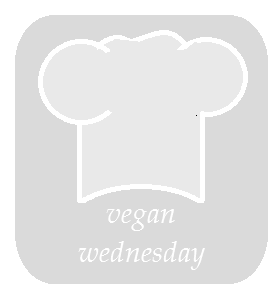 Well, some German bloggers have the answer to these questions. The project Vegan Wednesday is all about collecting the foods and meals vegans eat on an average day. They are submitted and then shared on Pinterest. This is already Vegan Wednesday No. 87! I think it is a wonderful idea and finally decided to take part. So one day last week I took pictures of the foods I ate to document them here. And yes, this was my day off and I had a lot of time to take about 70 pictures each before finally eaten my food. Next time I am going to document the food I eat on a regular work day.

This is my go-to breakfast: oats, banana, flax, soymilk, and some fruit. I eat something like this every morning. But before breakfast happens I always drink a strong expresso. 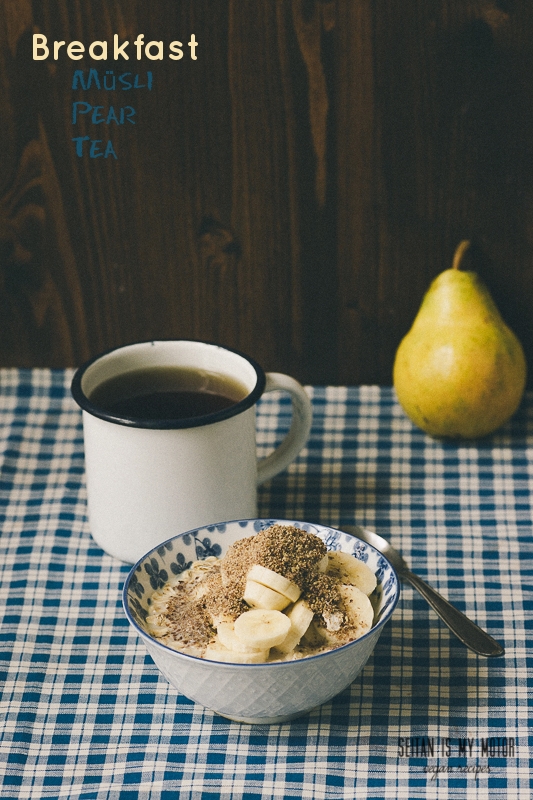 Green smoothies have become such a cliché for vegan and healthy eating. And yes, they are quite a nice way to eat a big portion of fruits and vegetables. They don’t keep me full for very long, which makes them a good snack between breakfast and lunch. This one had apple, pear, orange juice, and frozen kale. 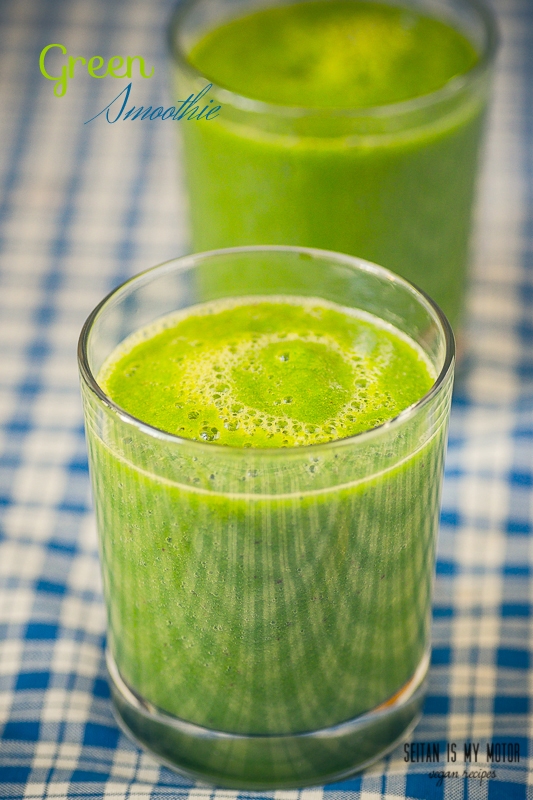 My lunch had something it almost never has: vegan cheese. I found a block of vegan cheddar cheese at a local reformhaus and wanted to try it out. When I first tasted a slice I found it pretty bland with a hint of margarine. But it’s quite good in a traditional cheese sandwich, which I am craving from time to time. That sandwich is often made with vollkornbrot (whole grain bread), butter, and cheese. The vegan cheese I had tasted a lot like German butterkäse (butter cheese, a very mild cheese) and it was a great stand-in both for the cheese and the butter. Other toppings used for this sandwich: garden cress and hummus. 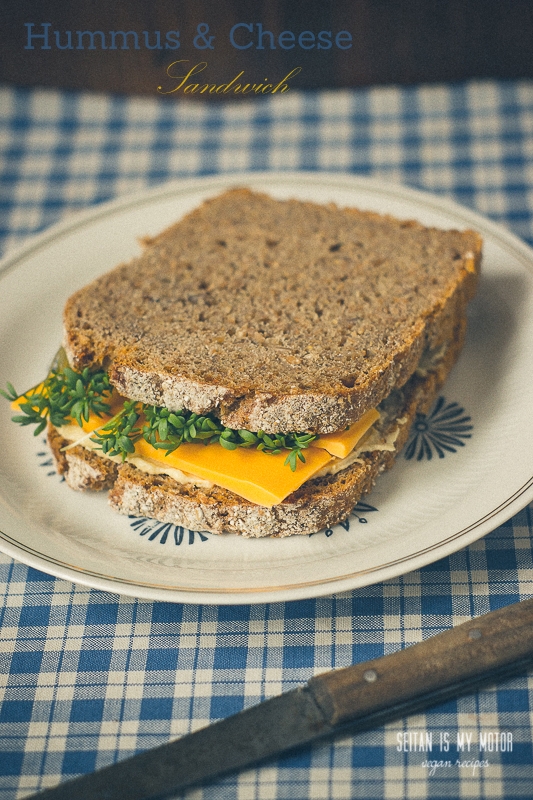 Of course I need to have my cup of coffee during the afternoon and I love to pair it with something sweet. The recipe for these streusel muffins has been on the blog forever. The original version was made with margarine. Last week I decided to update the recipe with coconut oil. It also needed a new picture! 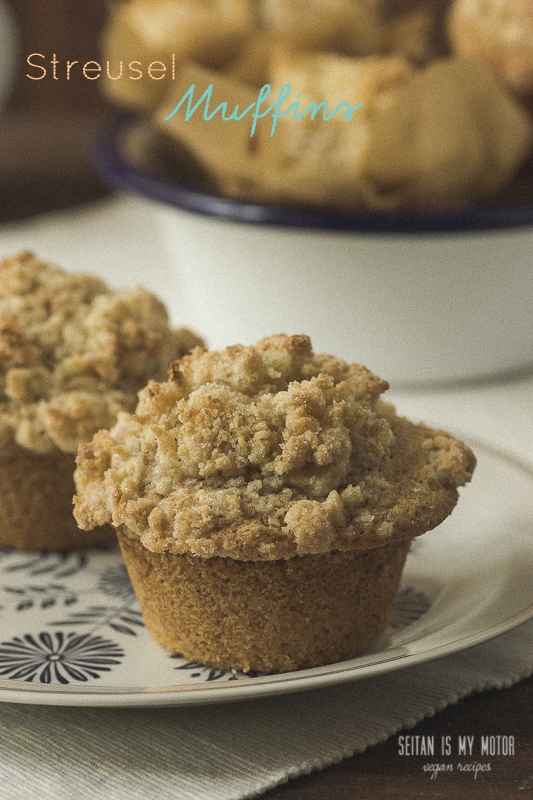 For dinner we had this easy and simple red pepper stew, which I made because I had to use up a bunch of those peppers. The stew is also made with TVP, which I hadn’t used in a long time, A couple of weeks ago our day care teacher asked me about preparation methods and recipes for TVP. She told me she was looking for a certain size but couldn’t find it at the local grocery store. So bought a couple of bags at the health food store and now have made several dishes with it. I love how easy it is to prepare and use. If you wanna try it, the recipe is at the end of the post. Happy Wednesday! 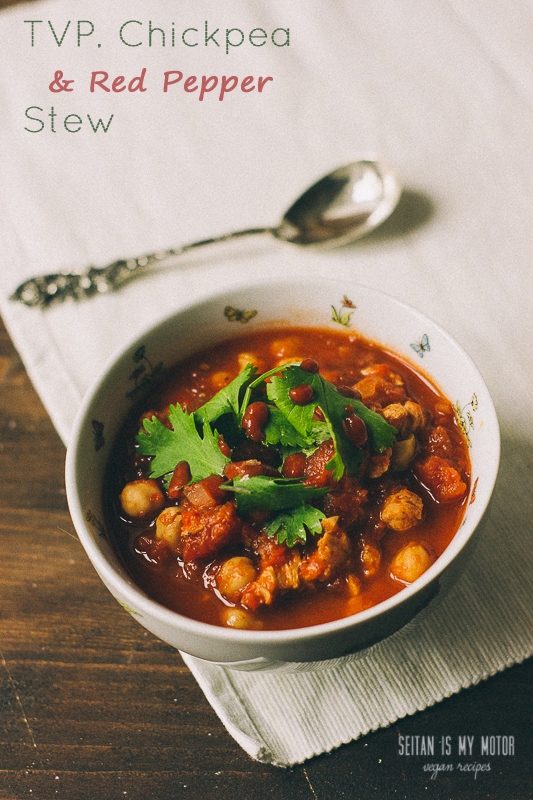 Place the TVP in a small bowl and pour the boiling vegetable broth over it. Let sit for 30 minutes, or until reconstituted. Stir from time to time.

Add oil to a large pot and heat. Add onion and cumin seeds and fry for 4-5 minutes, stirring constantly. Add garlic and stir.

Place the bell peppers in a blender and purée well. Pour into the pot, add tomatoes, vegetable broth, chickpeas, and reconstituted TVP. Cook for 20-30 minutes, add salt, pepper, and hot sauce to taste, serve with rice or other grain and garnish with cilantro.

Note: Instead of the TVP you can also use a second can of beans. It doesn’t have to be chickpeas, kidney beans are nice, too.

I’m happy I’m not the only person who eats the same breakfast everyday! Mine’s pretty similar to yours lately, just with strawberries in place of the bananas.
Uh oh, another Pinterest page for me to get lost in, I predict not getting any work done today ;) This is just what I need for when I’m drawing a blank on dinner.

Everything looks delicious! I’m glad you brought up an old muffin recipe, I can always use more of those. :) Will have to try it with coconut oil!

I love the idea of vegan Wednesday! This looks like such an awesome day of eating too and I’d love to try that Wilmersburg flavour sometime.

Curious as I am about what other people eat on a day-to-day basis and liking your blog in general so it’s nice to see you joined Vegan Wednesday, too. The muffins look great (Streusel!!) and the red pepper stew does, too – especially because you added whole cumin seeds and not the ground variety. I use both but the seeds add such a special element to every dish.

I agree, whole cumin makes all the difference!

oops I meant ‘thought’ not ‘though’

Posting daily food is a really nice idea — even longtime vegans find it interesting! What is grabbing my attention is the stew — such a deep, gorgeous color. It looks very satisfying.

I love this idea! I often lament that I can’t just do blog posts about the whatever foods I eat throughout the day. But I dunno. Maybe I will now.

What a delicious menu for a day. My husband just came in and loves the look of the stew (and the muffins too!)
We love your blog! Thanks for sharing..

ohgoodgolly another Pinterest site to get lost in…and all that vegan yumfulness! I love bowls of oats in the morning, especially flaxy fruity oats, usually blueberry, mango, lots and lots of cinnamon.
Thanks for the recipe…I want to take a piece of that sandwich bread and dip it in the stew while eating it, the way my grandpa used to do. Cheers! :)

What a lovely day of eating! I especially love the look of that stew – so vibrant! I’m going to go and try some large tvp chunks so I can give it a go. I also need to start getting back into oats for breakfast – I just moved house and while I usually have smoothies, my blender is SUPER loud and I now have five other housemates to consider. So since then I have been copping out and having toast, which isn’t super nutritious. Must get back on the oat wagon!

I think this is a great idea. Sharing everyday meals is so helpful for new vegans especially who might find more complex recipes a little overwhelming. There’s a similar (breakfast only) project on instagram/tumblr: http://crazybreakfast.tumblr.com/
Your food day looks great to me. Love how simple that muffin recipe is.

Thank you for the likn, Emma! I know that there was an even earler tumblr project on vegan breakfast started by Celine Steen. But I didn’t know about this one.