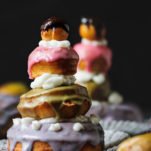 Since this blog is about food, I rarely get to talk about other things I like. But today’s Vegan MoFo promt is the perfect occasion to change that. I like books and films a lot and I like it even more when films are about books and writers. The Grand Budapest Hotel is a film about writers. Sort of. It’s also a  film about the author Stefan Zweig, whose works have inspired Anderson’s movie. (Also sort of. If you haven’t seen this movie, go watch it, it’s hard to describe. I promise it’s going to be fun!) In addition the director credits several old films, like Grand Hotel. Grand Hotel by the way is based on the fabulous Novel Menschen im Hotel (Grand Hotel) by Vicky Baum. There are other novels that could act as the model for this movie, like Hotel Savoy by Joseph Roth.

I have read Zweig’s The World of Yesterday but not the other works Anderson mentions. When I first saw Grand Budapest Hotel I was absolutely amazed by the fictional world Anderson had created. In the movie everything was torn apart and put back together in a way I have never seen before. The setting is a hotel in the fictional Central European country Zubrowka. The town around this hotel has similarities to Eastern European spa towns. Most of the the material was shot in Görlitz though, a small and beautifully renovated town right at the Polish border. It’s not far from Dresden where I live and it has become a popular US-movie location. Dresden also plays a little part in the Grand Budapest Hotel, I recognised a couple of streets and museum halls. In one of the most fascinating scenes in the movie a couple of characters chase each other through such a hall. Then they leave though a door and we find them back in Görlitz or somewhere else, but definitely not behind the museum in Dresden. Admittedly, this movie is not a documentary. And Anderson makes no secret of the fact that “the places [he] had envisioned just didn’t really exist anywhere“. He says he’s interested in the invention, he’s not trying to be realistic. He definitely has accomplished that. I recognised many buildings but couldn’t follow the characters’ paths because they were invented. I recognised the time period Anderson was covering but his interpretation was completely different both from the fictional and non-fictional works I have read about this period before. As I said, he put everything together again in a completely new way, even the tiniest details. The German location names used are funny and absurd and the spelling of many things is only superficially German (or French). I don’t know that much about Wes Anderson but his socialisation outside of Europe seems visible in all these details. (Or maybe he did it on purpose.)

For example, there’s a bakery in this movie called Mendl’s. In German this would be Mendl or Mendls Bäckerei. No apostrophe, I would say. At least not back at that time. Then again I might be wrong. I am siding with Konrad Duden here, who published Germany’s most influential dictionary. Thomas Mann on the other hand used apostrophes with genitive cases. So we’re probably lucky he wrote great novels instead of designing and printiong bakery signs. Anyway, Mendl’s supplies everyone with a pastry called courtesan au chocolate, which is again a mix of English and French words. Those courtesans au chocolate are a colourful and elaborate version of the French pastry Religieuse. For the movie this version was invented in a bakery in Görlitz and the recipe is online. The funny thing is that they used a dairy shop in Dresden, Pfunds Molkerei,  as setting for the pastry shop. I’ve only been there once in my pre-vegan days, not to buy cheese, just because it’s an outstanding location and a tourist magnet. I only lasted ten seconds though because it was smelly as hell in there. So I cannot really imagine it turned into a bakery, even if it’s only for a few scenes. Those poor actors. Beautiful pastries smelling like aged cheese. Whatever, let’s finally get to today’s topic: “Make something inspired by a book or film.” I did not only veganise the original recipe, I changed the whole thing. Because  my recipe is how I has imagined the courtesans before learning about the recipe. It’s my version of the story!

Note: For the food colouring I tried to go with natural dyes, but I think artificial ones would have been better. My colours came with a taste and I didn’t like both the matcha and the blueberry plus soda versions that much. So if you have access to artificial vegan food dyes, I recommend to use them. 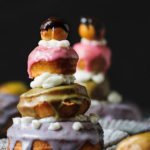 Seriously, that is a work of art! Almost too gorgeous to eat… almost ;-)

This is ridiculous!! I can’t imagine having the patience to make these but I’d very happily eat them. I also loved hearing about the locations used in the movie, I don’t think I’ll be able to watch the bakery scene without thinking about the cheese now!

These are so pretty! I don’t remember them from the movie, so now I have an excuse to watch it again :)

I love film, so it was really nice reading such a detailed post!

I think Wes Anderson loves the idea of making the audience aware that they are watching a film. A lot of great film directors do this, Alfred Hitchcock being one of the first main directors to do this. Watching his old films you can notice a lot of “goofs” with props, and it is on purpose. So I bet that a lot of the language mix ups were done intentionally to make people aware they aren’t actually in Europe, but in a fictional world, or to be funny, or both. XD

And as for the film location that is totally a film thing, not just Wes Anderson. When I went to school for film, one of the things we were told was to use several spots for one location. The example my teacher used was “If the character is looking out a window, and you cut to what they are looking at, you don’t need to film out the actual window the actor is looking through. Find a better window”

Right after I had posted I realised that I was talking complete nonsnse about locations! It’s probably just because I know what’s behind that museum and that the pastry shop is a dairy. I also love how Wes Anderson directs the movie to make us aware of so many things! I usually watch his films several times and still there are so many allusions, hints, and other tiny things I don’t get.

I can’t stop looking at these, they are so pretty!

Beautiful! Lots of things here I want to check out, so thank you :D

That doughnut tower is magnificent.
I love that movie! I also love The Darjeeling Limited.

I don’t see lots of movies, but I love Wes Anderson’s weird movies, and The Grand Budapest Hotel is probably my favorite one of all. I can’t even believe that you tackled this amazing project — and that they are so beautiful!! Was it super, super fun to eat them?? Did you feel like a magical fancy pants?

The colors are very Wes Anderson! Your information on linguistics was really interesting, all that stuff flew over my head watching the movie. The cheese shop turned bakery for the film is hilarious -I find the smell of cheese overpowering too, it would have been so hard to ignore that and act like the shop smelt like sugar and sweet risen yeast! I want to re-watch that seen just to see if I can catch a flicker in the eye or nose wince :)

OMG, this is amazing. I love Wes Anderson and the Grand Budapest and have often thought someone should veganize the Courtesans au Chocolat. Well done!!

I loved this movie so much!
What a great dessert!

These are the most adorable things I’ve ever seen. You’ve convinced me that I need to see this movie too!

They look extraordinary! You must be so impressed with how they turned out. I’m a huge Wes Anderson fan. I didn’t know where Grand Budapest Hotel was filmed, but I’ve quickly scoped out Goerlitz and it looks very pretty indeed. Maybe I’ll try to plan a visit!

It would definitely be worth a day trip! And from there you can easily get to Dresden or do Poland.