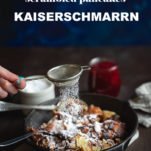 Imagine a really fluffy pancake that’s already torn into bitesized pieces so that you can put it right into your mouth with no effort at all. Kaiserschmarrn, which translates as emperor’s mess, is a traditional, very popular Austrian (and German) dessert recipe. Kaiserschmarrn is very different form traditional crepe-like German pancakes. It’s made from a thick, soft and only lightly sweetened batter. Instead of baking the pancakes individually, you pour all of the batter into a pan and scramble it while cooking. Kaiserschmarrn is usually served with roasted plums or applesauce. But you can make a very simple version with just powdered sugar on top.

In Germany, pancakes aren’t eaten for breakfast. Sometimes they are a dessert food but it’s much more popular to eat these Mehlspeisen (flour based dishes) for lunch. We’ve normalised the whole thing by simply calling it sweet lunch. As I’ve said before, I am not a fan of sweet lunch. I like Kaiserschmarrn as a dessert, especially on a cold autumn or winter afternoon and accompanied with a hot cup of tea. But what do I know?
My mum once picked Kaiserschmarrn for lunch at a restaurant, when she didn’t like anything else they had on their menu. And my daughter would eat sweet lunches every day of the week if I let her. In the end it doesn’t matter if you eat this for lunch, dessert, or breakfast. Just try it, it’s so delicious and easy!

The weird name emperor’s mess can be traced back to a couple of legends. One of them is about the Empress Elisabeth of Austria and her husband emperor Francis Joseph I. Basically the dish was made for Elisabeth and she didn’t wanna eat it. So her husband took over, saying something like: “Okay, just give me that mess [crap] then.” Schmarrn is a word found in Austrian German and Southern German dialects. I means mess, scramble, or crap. So basically the name goes back to a (mild) swearing.

Another, similar story can be found in the Washington Post, which published a Kaiserschmarrn recipe (not vegan) earlier this year. It goes like this: “A frazzled farmer created the dish in a tizzy when Austria’s Emperor Franz Joseph and his wife showed up hungry at his home.”

How to make vegan kaiserschmarrn

Traditionally, kaiserschmarrn is made with divided eggs. To create a very light texture with lots of stability, you whip up the egg whites and fold them into the batter. To get the same results without eggs or expensive egg replacers, you can simply use aquafaba (= liquid from a can of chickpeas). Just beat the liquid from a can of chickpeas and you’re all set. Like with stiff egg whites, it is really important to carefully fold the aquafaba into the batter. You’ll want to keep as much air in your pancakes as possible.

Kaiserschmarrn recipes often call for rum soaked raisins. For this version I decided to go with chocolate chips instead. If you want to use rum soaked raisins, soak about 50-60 g raisins in 2-3 tablespoons of rum and let them sit for an hour before you start preparing the recipe. 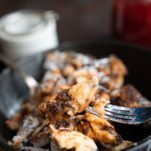 So sorry; Constanze I had Thomas on the brain.

Very fun to make! Thanks Thomas; you are so creative!

Hi Kim, aquafaba is a very easy to make vegan egg replacer that is made by whipping up the water from a can of chickpeas. If you google it, you will find tons of information. I also use it in a lot of recipes, here’s a bit more information on how to turn the chickpea brine into a foam that looks and acts just like whipped egg whites.