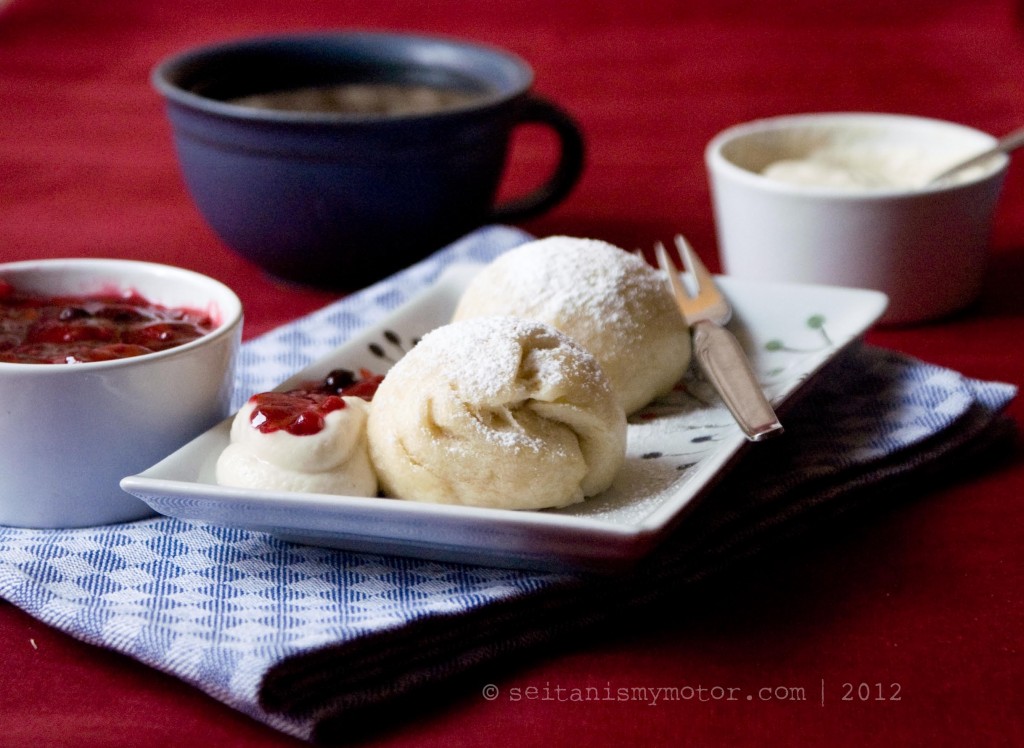 A while ago I received a reader request for dampfnudeln. Dampfnudeln are yeasted dumplings filled with jam (often plum). (Dampf means “steam” and nudel means “noodle”.) They are also called Germknödel or Hefeklöße. (Both terms can be translated as “yeasted dumplings”.) I have to admit I am not an expert when it comes to recipes like this. Dampfnudeln are a Southern German or Austrian thing and I am from the North. It’s funny that I almost never get recipe requests for Northern German recipes. Since the requests usually come from Northern Americans who have German relatives or ancestors, it seems like nobody from Northern Germany ever emigrated to the USA or Canada. I know this isn’t true. So maybe our recipes are so crappy that nobody wants to preserve them. People where probably glad they left them behind.

Anyway, I learned that there are several ways to prepare the yeasted dumplings. You can steam them or boil them in water. Or you can steam them in a milk, fat and sugar mixture. It seems that the water steamed/cooked dumplings are often called germknödel and the ones cooked in milk are called dampfnudeln. But I found a lot of conflicting information on this. The ones steamed and cooked in milk are supposed to have a sticky bottom once they are done. The ones steamed in water are more like enriched, light and fluffy bread rolls.

I tried both methods and had way better results steaming the dumplings in water. (I used crappy equipment. I need to try this again with a better pot.) One thing you read about the cooking in milk method is that you should use a large and heavy pot (for example cast iron) and with a lid that closes perfectly so that the steam won’t escape. One thing you should never ever do is open the lid. Well, our lids don’t close that well. And when I tried to cook the dumplings, the soy milk boiled over so that I did in fact open the lid. I guess my pot just wasn’t deep enough (It’s more like a deep pan.) Of course the minute I opened the lid the dumplings all sank and in the end they came out very dense and chewy. They were still delicious. Just not what I had expected. (You can probably guess what the texture was like by looking at the following picture.) 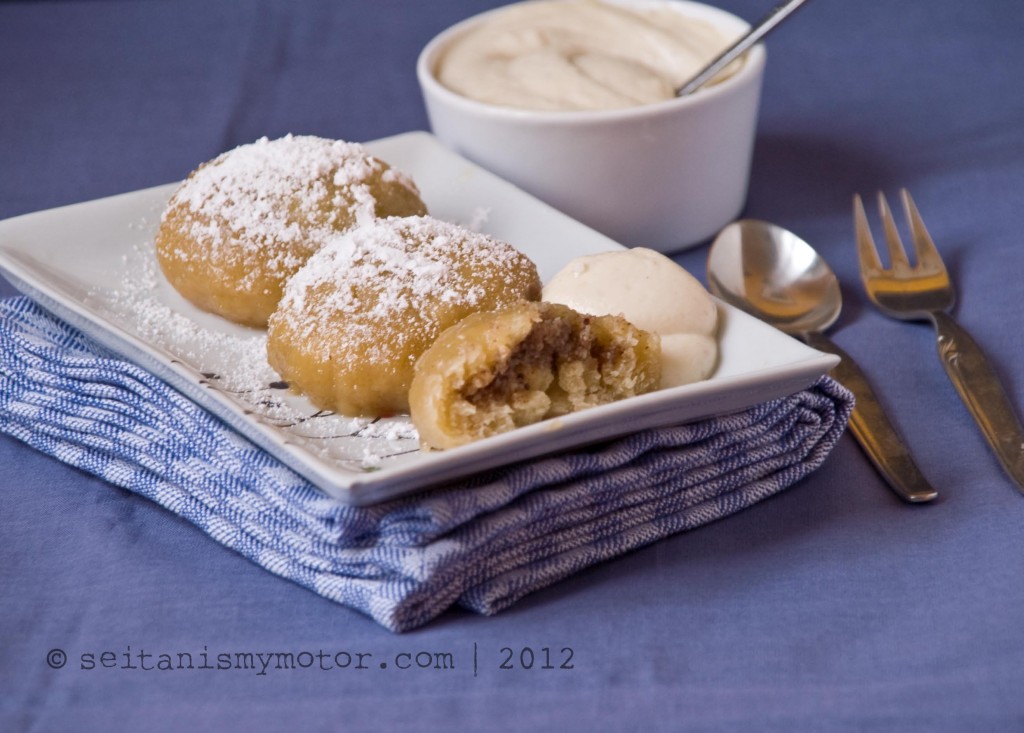 For my next attempt I filled a large pot with water and placed a steamer basket inside. I steamed the dumplings for 20 minutes (without opening the lid!) and they came out perfectly. So this is definitely my favourite method to make dampfnudeln now. (If you want to try the other version, here is a description. As I said, traditionally these dumplings are often filled with plum jam or compote and they are served with vanilla sauce. My versions are not so traditional, but they are really tasty, too. I filled the dumplings with with mixed nuts and served them with homemade almond cream and store bought rote grütze (red berry compote, my Northern German contribution to the recipe, here is my homemade version.) This was so delicious! The almond cream came out  amazing and the slightly tart rote grütze was the perfect addition both to the sweet cream and the sweet dumplings.  We ate way too much of this.

For the almond cream:

To make the almond cream:

Bring a small pot with water to a boil. Add the almonds and blanch them for 2 minutes. Drain and let cool. Remove the skins. (Even if you have blanched almonds on hand, please don’t skip the cooking step. Just like soaking it makes the almonds soft and easier to blend.)

Combine almonds and remaining ingredients for the almond cream in a blender. Blend until smooth. Set aside.

To make the filling:

Combine nuts and sugar in a food processor. Process into a fine meal. Add soy milk and pulse a couple of times until everything turns into a sticky mass. Set aside.

To make the dumplings:

Combine flour, instant yeast, sugar and salt in a bowl. Mix well. Add soy milk and oil. Knead with your hands for two or three minutes. If the dough is still sticky, don’t worry. Most of the gluten will develop during resting. Cover the dough with a damp kitchen towel and let rise in a warm place for about 60 minutes. Since the dough is quite enriched, it won’t rise that much. It definitely will not double. Knead the dough again for one minute. It should now have a silky texture and not stick to your hands or your working surface anymore. Place on a lightly floured working surface. Divide the dough into eight equally sized pieces. Roll them into a disk and place a heaping teaspoon of filling in the centre. Carefully close the dough around the filling and make sure it is properly sealed. You can roll the balls on your working surface once again to reshape them. Place them on a lightly floured surface and cover with a damp kitchen towel. Let rest for 20 minutes. (Again, they won’t rise much.) Place a steamer basket in a large pot, add water and bring to a boil. 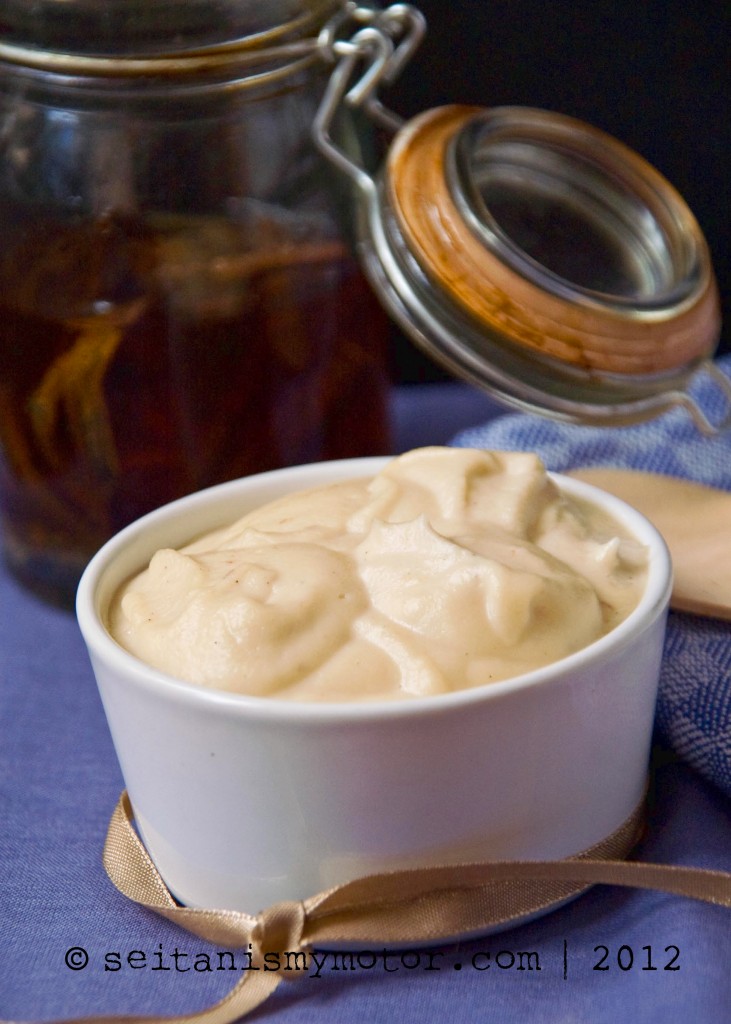 Mmm… I’ve been looking for a recipe for these! We loved getting them at the Christmas markets when I lived there with my family. We always got the one filled with cherries and topped with vanilla cream sauce,

Steamed Dumplings! I’m definitely going to have to try these out, and maybe change up the filling a little. They look so cute and tasty!

Sweet dumplings are still pretty foreign to me, since they really don’t exist around here. Apple dumplings, maybe, rarely, but yours here sound way more exciting.

I have no idea what those things are but they sounds incredibly delicious! Hope life gets a little less hectic for you :)

I’ve never heard of sweet steamed dumplings before, and they look incredible!

I had no idea there were German steamed dumplings–I thought they were just a Chinese foodstuff. These look wonderful, Mihl. Thanks for showing us how to make them!

I’ve never made dumplings of any sort, but dessert is always a good place to start in my book. They sound wonderful, and I can see myself eating the almond cream straight from the spoon!

Thanks, Jodye! Well, we pretty much ate most of it straight from the spoon.

So beautiful! I love your blog because it always teaches me something about food that I didn’t know before. I think I could eat all the almond cream with a spoon straight from the bowl, and I’ve already made and loved your rote grütze :)

I never knew the name of these as when I was in Germany my exchange oma would make them all the time and I just forgot to ask.
However seeing this reciepe brings back so many memories and now I am just going to have to get cooking! Thanks

These look yummy. I am used to the dumpfnudeln that you serve with potatoes gulosh (?spelling!)They are not sweet. They just consist of flour, salt, yeast and water. Then you spray the pan and add small amount of oil with water to steam. We here in USA have used a electric frying pan, and they always come out just nice. Soft on top and a nice crispy bottom, when the water has all evaporated and then the oil gives them a nice crust. I watched my grandma and mom make it and do not have a recipe, just go by feel!!!!!!!!!!! There was an someone that had told us about dampfnudeln that he had in Europe that was served with a vanilla sauce, When my mom made them, she made a vanilla sauce/pudding to go over them for him. We thought he would never stop eating!!! We have made plum dumplings with a potatoe dough, but never the dampfnudeln with a filling. I will have to try this. Thank you for your efforts. Please do not apologize for not being active on your blog. Your family and you comes first!

Thanks for your nice comment, Gudrun! I think the savoury ones are usually called knoödel or klöße here. They are popular in the Czech republic, too! Very tasty stuff with goulash. And those electric frying pans sound awesome.

It looks perfect! Was it a pain to clean the soy milk that boiled over? We have a mega old stove top here, so cleaning anything is a major bummer. And I’m such a klutz there’s always lots of cleaning to do in the kitchen.
Send some of the cream my way so that I can drown my cleaning sorrows in it.

Mega old oven here, too. I think I already kind of gave up on it and just dream about a new one.

I’ve never heard of dampfnudeln before, but they sound amazing! (And I don’t think I know the difference between northern & southern German food–now I’m curious to figure it out.) Your dumplings turned out gorgeous and the nut filling sounds perfect for winter!

Thanks! There are lots of differences, also between east and west and so on. A lot to learn even for me.

I think it would be hard to steam dumplings in milk because it has such a tendency to boil over. I like the idea of steaming over water much better. I love the texture of steamed buns, and the ones you made look and sound delicious.

You are right and I thought the same thing. But there must be a trick to it because it is a quite commom technique. I hope I can figure it out.

Cinnamon Buns with a Chestnut Swirl