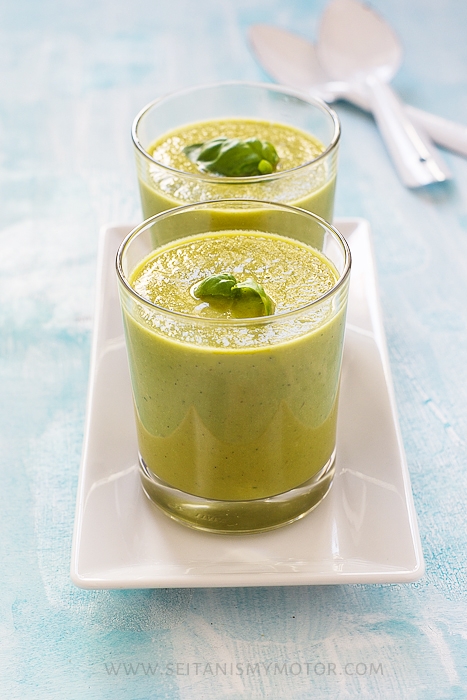 Have you ever heard about a vegetable which is being treated like a member of the royal family? Well, if not you should come to Germany during asparagus season. It starts at some point in spring and ends exactly on June 24th. Yes, that’s right. We don’t get to eat asparagus all year long. At least not if we want locally grown asparagus. And most people do want that. Which is really funnyconsidering the fact that usually people don’t care about seasons or seasonal availability. People eat tomatoes in winter and apples in spring. They can buy them all year long. Because there’s always a hothouse somewhere in Spain or the Netherlands bursting with cheap tomatoes or a plane from South Africa full with grapes and apples. Nobody cares. But when it comes to asparagus people do care. Here in Germany it’s as unwritten but very important law that asparagus plants need enough time to grow before the first frost is expected. And therefore St. John’s Eve is supposed to be the last day of asparagus season. After that day the plant is left alone to grow back and nobody eats asparagus until the start of the next season.

Because we have these seasonal limits, people take asparagus very seriously. You will find this vegetable on every restaurant menu and in every canteen all over Germany once the seasons starts. The funny thing is, asparagus dishes are usually very boring and not particularly vegetarian or vegan friendly. Because traditionally vegetables are not such a big thing in German cusine, it seems that people have no idea what to do when then want to center a whole dish around a vegetable. So all they can think of is to serve it with potatoes, melted butter and a chunk of meat. Or they drain it in Hollandaise sauce. And because German asparagus is usually white, those dishes look even more boring than they sound. And that is probably the reason why I never really liked asparagus. “Hey, we have fresh asparagus! Do you mind eating it with plain potatoes?” Well, yes. Sorry, I do mind. 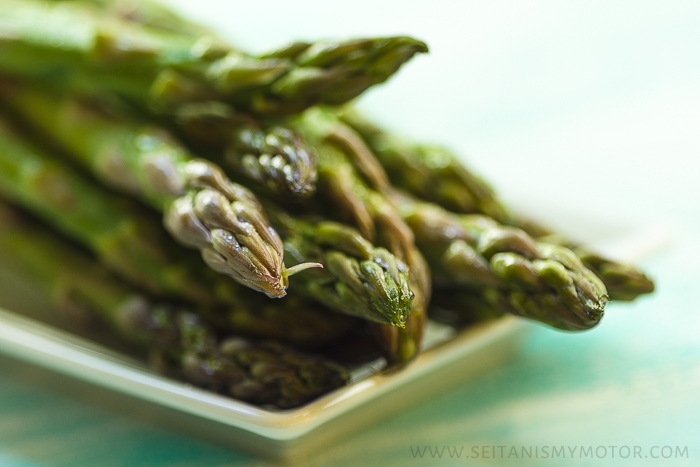 This changed when I discovered green asparagus. A couple of years ago Spanish, Italian, and Greek green asparagus stalks invaded the supermarkets and kicked the white king from his throne. And suddenly I ate asparagus every second day. Green asparagus seemed easier to handle (you don’t have to peel the whole stalk) and there isn’t this whole myth surrounding it. You can really eat it like you want and throw it into every salad, stir fry, or soup ou can think of. Some people must have shared my thoughts. Because these days you can visit any of the little booths that pop up during asparagus season and they will have locally grown green asparagus. One of them is conveniently placed close to the main station where I have to change to pick up the kid every day. It’s like my second home now.

This simple soup requires almost no time and no preparation work. You can eat it both hot and chilled. And even though F. insisted (again) that she was not willing to eat asparagus, this soup changed her mind.

Heat the oil in a large pot. Add onion and fry for 5 minutes or until translucent. Add garlic and fry for 1-2 more minutes.

Place asparagus, peas and broth in the pot and bring to a boil. Cook over medium heat for 15-20 minutes. Add coconut cream and stir until dissolved. Place in a blender together with basil and puree until smooth. Season with salt and pepper.

There is a lot of locally grown asparagus here in Michigan, but people don’t worry about only eating it seasonally. Although the local, in-season asparagus tastes better, people eat it all year long. The green asparagus is more popular because the white is more expensive. This year I am planting asparagus in my garden and I should be able to start eating it in 2 years. I think it will be worth the wait. Maybe I will make this lovely soup with my own asparagus in 2 years!

just sitting down to a bowl! used mint and nigella seeds. Thanks for the recipe x

That sounds wonderful. Thanks for letting me know, Aissa!

I’ve never been very in love with white asparagus, but I like the green variety. I must confess that I’ve never peeled asparagus. We tend to buy them while they’re medium thick though. Big fat asparagus needs more care! My husband freaking LOVES asparagus. I should make this for him now that it’s getting balls hot in Texas!

Ooh. this sounds good. I only really eat asparagus during the UK season, so will give this a try soon.

My boyfriend LOVES asparagus soup. I’ve never been a huge fan, but then he’s only ever given me the stuff from a can! I should make this for him and see what he thinks. Can’t go wrong with basil, so I’m sure I will love it too :)

I’ve never got into white asparagus which is less usual than the green here but I do love green asparagus and get very excited about asparagus season and bemused to see shoddy imported bunches in the shops now it is almost winter – who are they kidding. In Australia there seems to be a rule about asparagus and salmon going together but I often eat a lot of it steamed or lightly fried and salted. It is the king but it doesn’t need meat. Your soup looks very summery. I have one that is more hearty with potatoes asparagus and quinoa that I would highly recommend.

If you do buy high-quality white asparagus, you also don’t have to peel the whole stalk ;-)

I have come to love a very simple preparation:
Peel (if necessary) the asparagus and cut into 5 cm bits. Heat some olive oil in a large pan and simply throw in the asparagus together with a decent amount of fresh parsley. Cook on medium to high heat until the asparagus reaches the state in which you want to eat it (I actually prefer it somewhat al dente these days). Season with salt and pepper and serve with boiled potatoes (Salzkartoffeln). Yum!

Your soup recipe sounds intriguing, though. Peas and asparagus seem to be perfect companions (raw asparagus actually tastes quite similar to peas) and I’ll certainly try it the next few days.

[I have finally succumbed to writing in English – at least this time – the asparagus love must be shared!]

I dunno about that. We usually peel good quality asparagus, too. Thanks for sharing your preparation method. I love fried asparagus.

It’s exactly the same here! Brits are so proud of their asparagus and it’s probably the only vegetable whose seasonality is actually respected.
It’s definitely a favourite with me. Love the look of this simple soup.

That’s insteresting. Do you also have a fixed end date for asparagus season?

The asparagus worship is the same in the Netherlands and I happily go along with it. We just had a lovely traditional plate of white asparagus with white sauce, tater tots and a veggie burger. But this soup sounds very delicious too :-)

That sounds amazing! I wish I had tater tots now.