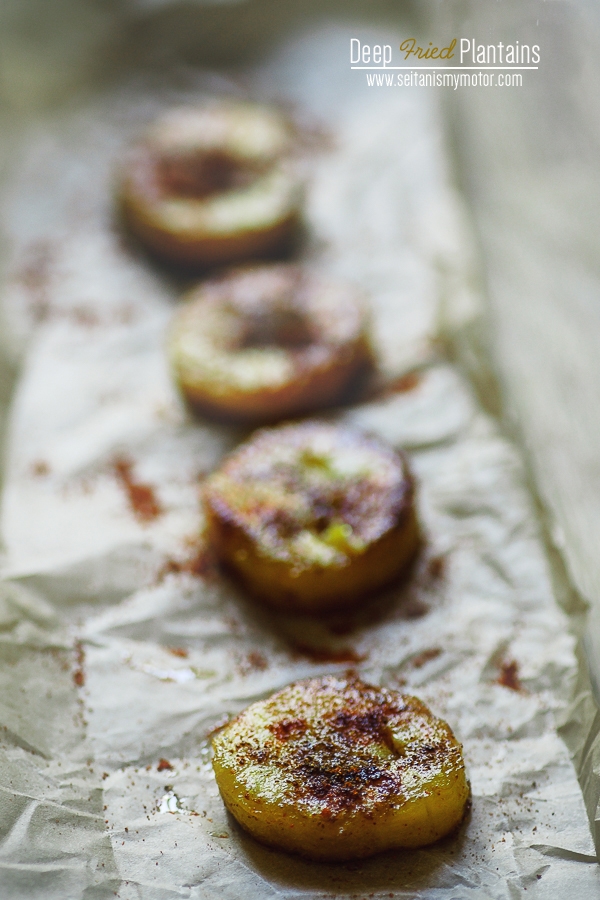 It’s been a while since I participated in the Vegan Wednesday roundup. I never manage to take a picture of all the food I eat in one day, but since that’s not mandatory I thought that this time I’d just write about some recipes that we have recently made.

Some time ago we bought some green plantains. It was an impulse buy and those are bad because I usually have a hard time figuring out what to do with the products I buy this way. This time the plantains had already been lying around for some time, they had changed their colour and were sweet and soft. I finally decided to use them. I knew that two of my cookbooks contained plantain recipes and I decided to go with the easiest one. I found a description for fried plantains in the book Caribbean Vegan by Taymer Mason. That recipe has only two ingredients: plantains and oil. The plantains are simply deep fried in a pan, that’s it. Taymer includes some tips about pairing plantains and explains that the sweet ones go very well with spicy dishes. Since we didn’t plan on anything spicy I just sprinkled some chipotle powder right on top of the bananas after they were done. I am not a great fan of combining sweet and hot stuff but these were good! Sweet plantains are not that different from regular bananas and you could actually use those for frying. Just make sure that they are still a bit firm. 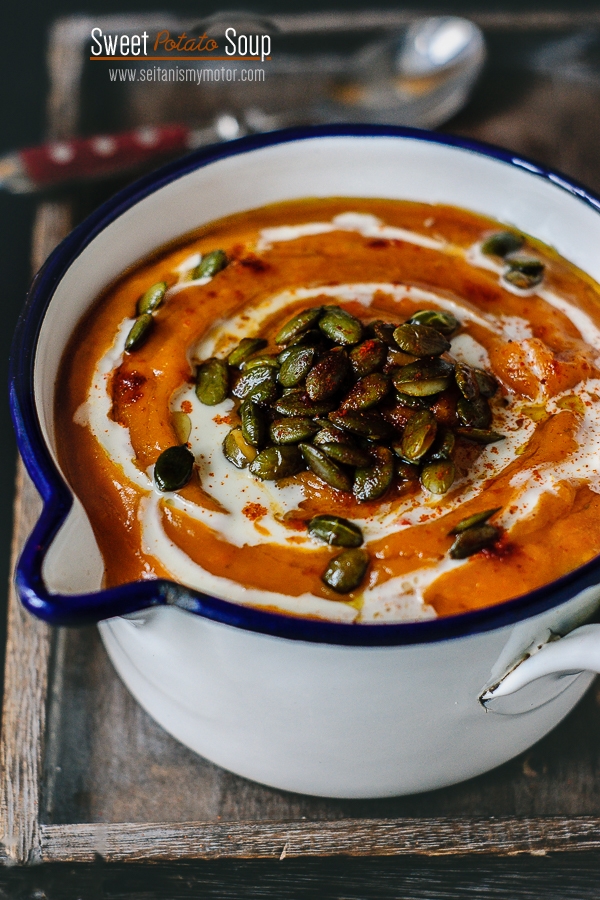 I do use Pinterest from time to time, mostly to collect food photography I like or recipes I want to try out one day. Last week I saved a recipe for this sweet potato soup. It’s a vegetarian recipe that calls for heavy cream which I substituted with oat cream. The ingredient list was a bit unclear as it had no weight or cup measurements for the vegetables. It called for four large sweet potatoes. I realised only after I tried to make this recipe how much these vegetables can vary in size! I had bought three and they weighed 1.3 kg! I used all of them anyway since I had already peeled them. My soup came out much thicker than the original recipe and its colour was brighter, too.  (The soup has a pastel colour in the original version and the directions mention to thicken the soup with cream. I had to thin it with cream and water.) I probably should have doubled the amount of cream or halved the amount of sweet potatoes to get the look of the soup in the original picture. But it all doesn’t matter much since the soup was very delicious! It’s a simple and easy recipe that can tolerate all kinds of variations: we used a red pepper instead of the carrots and added a teaspoon of Hungarian paprika. The pumpkin seeds on top were fried in oil and I sprinkled the bowls with a generous amount of chipotle. 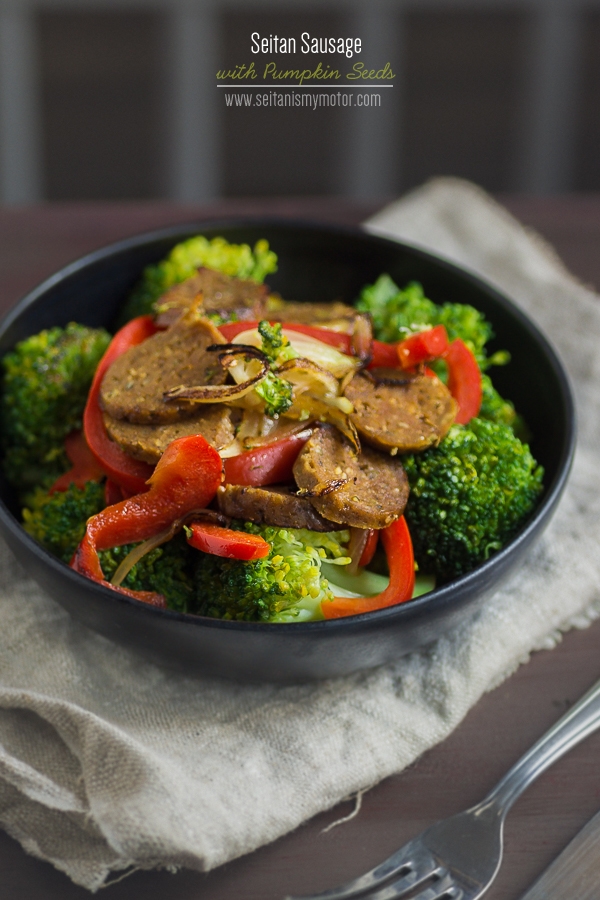 My daughter is a huge fan of snack sausages made of seitan. There’s one made with pumpkin seeds that she asks for every time we shop at the health food store. And I cannot blame her, I really like that one, too! But of course those little sausages are quite expensive. Recently F has discoverd that she likes to help me cooking and sometimes runs into the kitchen declaring “I want to cook something!” Yesterday evening I suggested we could make our own pumpkin sausages and F loved the idea since it would include stirring the ingredients and kneading the dough. I admit that I simply copied the ingredient list for the pumpkin sausages that I had found online. The sausage doesn’t taste exactly like the original version but it was a really great activity we did together. I can already imagine the weird looks she’ll get from people whenever she tells them she makes her own sausage.

Have ready a large pot with a steamer basket and water. Bring the water to a boil while covering the pot with a lid.
Have four sheets of aluminium foil ready (letter size) and divide the dough between the foil pieces. Form the dough into a log and wrap in foil. Place in the pot with boiling water and steam for 45 minutes. Remove and let cool completely then transfer to the fridge and let rest over night. Serve fried or eat as a snack.

Ooh these sound fantastic! I love that you used plenty of oil for these sausages. Most recipes I’ve tried only call for a little bit of oil and I always end up doubling it to keep the sausages from getting too dry. I make sausages about once a week and it’s always fun to try new recipes, so next time I’m making yours. Can I borrow your little kitchen helper? :)

I don’t want to sound like a broken record, but I have to mention again that your pictures just keep getting more and more beautiful! You always took nice ones, but lately they have been amazing.

I’d love to try the recipe for the sausages. The directions include adding nutritional yeast, but I don’t see that listed in the ingredients above. How much nutritional yeast do you use? Thx!

Thank you so much for catching that, I just fixed it. It’s 4 tablespoons.

It’s downright shameful that I’ve still never made my own meatless sausages, and even more so now that I have your crazy good recipe for inspiration. I can already taste them now- With those harmonious yet bold seasonings, you can’t go wrong.

That sweet potato soup looks amaaaaaaazing. Gorgeous photo! It’s been a couple of winters since I’ve made a sweet potato bisque (I usually default to butternut squash), but I’ll have to try this variation soon. I’ve also never had sausages with pumpkin seeds in them, but I’m intrigued!

I wonder if the looks get even weirder when F says she makes her own sausage and then says she is vegan. I should try these with sylvia who loves sausages but I haven’t made sausages for a while. (And the last packet of sausages I bought were after the use by before we used them). As for sweet potato soup, I made one tonight and simmered it 3 hours too long (ie forgot to turn it off) so it was actually a mash and not your lovely colour – in fact I think yours looks nicer that the original – I am all for more veg and less cream in soups and those pumpkin seeds look so yum

She’s vegetarian, but I know what you mean. And the funny thing is that people think not feeding kids meat is mean but letting them make their own is mean, too.

F is so awesome! I love that you have your own little helper in the kitchen. I should enlist the cats, but I’m afraid the results would be quite messier. The soup looks super fancy too; I actually prefer soups with a bit of body to them rather than too watery, so I think this one would be just right for my taste.

I tried to veganize the world’s best cake from sweet paul and also didn’t quite get it to look anything like his. That pumpkin seed sausage sounds so good, I am going to have to try to make it since I haven’t seen anything like that for sale here.

Potato Salad with Bratwurst and Rucola

Zucchini Soup with Tahini and Mint