I am a language nerd. I spent this morning looking up why rhubarb, or rhabarber in German, is written with an h after the r. The latin word for rhubarb is rheum barbarus. Barbarus means foreign. Rheum is derived from the ancient greek rheu, and that’s where the h comes from. It indicates a certain pronunciation of the letter rho at the beginning of a word. Not that interesting? Alright. While I was looking all of this up I found some funny sentences in the book On Food and Cooking by Harold McGee (highly recommended, by the way). On page 317 McGee writes that rhubarb’s “main use in the West is as a tart stand-in for fruit”. On page 367 he adds that rhubarb “often masquerates as fruit”. Both statements sound kind of mean, as if rhubarb stalks would sneak into our kitchens, drag the strawberries out of a pie and take their place only to dupe us. But I guess McGee has a point, because he also explains that rhubarb only became popular in pies and other sweet foods after sugar had become affordable. Since then it has been treated like a fruit and made palatable in desserts with tons of sweetener. But then it’s not the rhubarb that dupes us here. It’s the sugar. (See, sugar is bad.)

Last Sunday we were enjoying our last rhubarb stalks, baked into a crisp, which is basically nothing else than a very, very lazy pie. This is a simple and versatile recipe and almost every ingredient could be substituted with something else. I used coconut flour, but oat flour or even whole wheat flour would work. For the almond butter you could use any other nut butter as well. Oh, and if you don’t have rhubarb, use berries or even apples. I used a 22 cm bread pan (9-inch loaf pan) for this recipe, and that makes enough for three people. P complained that the filling wasn’t sweet enough. He’s probably right but it’s no problem to double the amount of sugar mixed with the rhubarb. 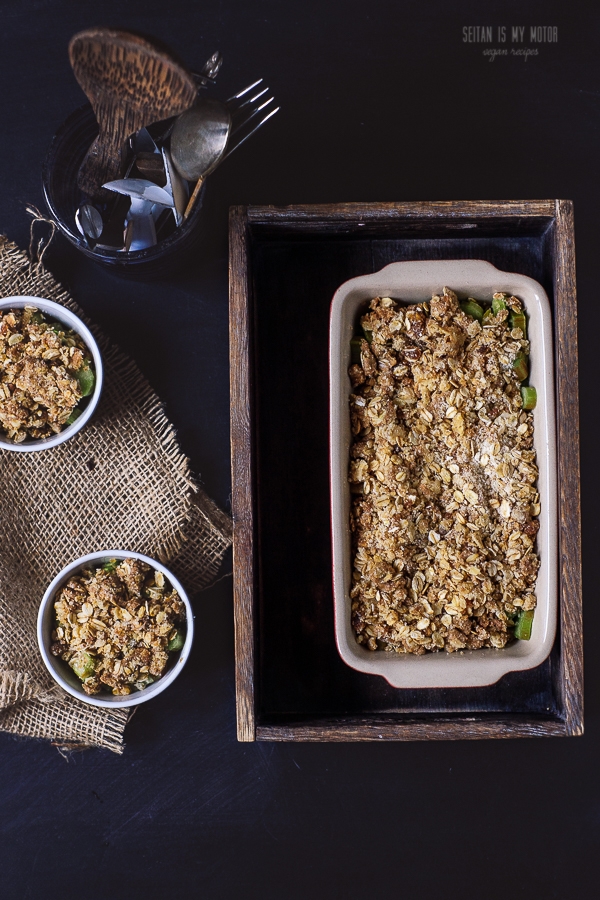 Place rhubarb, cornstarch, and agave nectar in a 22 cm (9 inch) loaf pan and stir to combine.

Bake for 20 minutes or until the rhubarb is soft and the topping crispy.

I always find it funny that some people call it crisp – I grew up with this dish as a crumble! Looks delicious. We have been having a lot of rhubarb lately, I have a crumble of my own coming up – I love it with apple or strawberries and orange zest.

I think the difference is that if it contains oats, it’s a crisp. But I didn’t grow up with any of these:)

For many years I have had tons of rhubarb in my backyard and I did not know what to do with it, and now thanks to you I can see many ways to use this vegetable in a vegan way. Thank you so much.