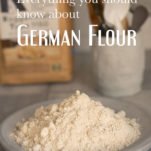 Flours are differerent in different countries. Whenever people ask me what kind of flour works best with my recipes, I find that there is a lot of conflicting or even false information on flours to be found online. For example there are a couple of comparisons between German and American flours that are very misleading. (In this article I compare German flours to British and US-flours. Most of the questions concerning flours I get from people who live in these two countries.)

Some people think that German flours with lower type numbers are finer than those with high numbers. That is not true. All flours are fine flours. There are a few exceptions though. For example, we have spätzlemehl. (Used for spaetzle but also for yeast doughs.) This is a type 550 flour which has a bit of dunst mixed in. Dunst is a kind of very fine semolina that helps the dough absorb more water. Another name for this kind of flour is griffiges Mehl. We also have something called Instantmehl or doppelgriffiges Mehl (instant flour). This type 405 flour has lots of fine particles that you can see and feel. It can be used to thicken soups but also as a pasta or pancake flour. Here’s a comparison between both type 405 flours:

You cannot compare all British or US bread flour to any German flour. What I mean by that is, American or British flours are categorised by protein and gluten content. German flours are categorised by ash content. Comparing them by protein is not helpful and still many pages do this, for example here or here. But it’s misleading. We have different flour traditions that value different things. One reason probably is that in Germany, we use flour with a lower gluten content right from the start. We use different wheat berries. In the US, as far as I know, hard wheat is used to make bread flour and high gluten flour. Soft wheat is used for cake flour and pastry flour. Great Britain is very similar. In Germany we use soft wheat for all flours. Hard wheat has more protein than soft wheat and it can also absorb more water. These properties make a big difference when baking bread. You should keep them in mind.

On many comparison sites you can find online, German type 812 flour is compared o bread flour. ThaBut these flours are different. The German type 812 may have the same protein content, but it’s made from soft wheat instead of hard wheat. (Plus, 812 flour is rare. You can only buy it online.) And German Type 1050 wheat flour can most definitely not be compared to high gluten flour, as it is often done online. (It has the same protein content as type 812 flour by the way.) First of all, it is made from soft wheat (so it will absorb less water!) , secondly, it has less gluten, and thirdly, it is much less refined than high gluten flour. If you compare German type 812 wheat flour and type 1050 flour to bread flour or high gluten flour that is misleading.

I lied. There is bread flour. But it’s hard to get. (You can also make your own.)

Okay, you can find something very similar to US or UK bread flour here. It is called Manitoba flour. Manitoba flour came to Germany via Italy, where it seems to be quite popular. If you buy Manitoba flour from a German mill it is graded like all German flour. They sell it as type 550. Which is another reason why it is misleading to call type 1050 flour a high protein flour. Like type 812 you won’t find Manitoba flour at a grocery store. You can buy it online. But personally I cannot be bothered to buy my flour online, especially if it’s for bread. Manitoba flour is expensive and I am quite satisfied with the flours I use. You can also make your own bread flour. (By adding gluten.) Here’s a handy chart.

What flour should I use?

In most of my recipes, I use German type 550 flour. I usually translate it as all-purpose flour even though I know it’s not the same. But in this case I’d say it’s close. The flour I use is not bleached (bleaching flour is banned in Germany) and does not have any added vitamins. I use type 550 flour both for white breads and cakes. For cakes, you could also use type 405 flour. In my experience both have the same gluten content and it doesn’t make much of a difference. Type 550 flour just has some more nutrients. If I make wholemeal breads, I usually mill my own flour. In general I try to experiment with all kinds of flours. I encourage you to do the same. It’s fun and you can learn a lot about flour properties just by kneading the dough. If I do make recipes from other countries and they call for bread flour, I will add gluten to my flour. This usually gives me results I am looking for. This is optional and if you don’t have a bag of gluten lying around, don’t bother.

I’m doing research on the best flours across the globe for washing to make seitan and I came across your site and this post. Very insightful! Have you washed flour to make seitan? If so, do you have a recommended flour for that? I’m specifically looking for brand/type and protein content if you know it.

Nope, sorry Jen! I am way too lazy for that. I buy gluten powder. (Or vital wheat gluten as it’s often called.)

This article is very insightful. I am a baker in Ireland looking to move away from high gluten refined flours for my sourdoughs. I was wondering if you could recommend some German bread books that speak to these processes and traditional German bread baking (preferably in English).
Thank you so much for sharing your knowledge.

Hey Terri Ann, thank you! I can recommend everything by Lutz Geißler (letter ß=ss). Unfortunately his books are only available in German so far but maybe his blog (and Google translate) is helpful for you. The site is called ploetzblog It is a really great ressource with lots of amazing recipes.

Great article. Thanks. So confusing! There are so many articles I’ve read that make none of this clear. What then in your opinion is the best German flour for pizza dough. I’ve been using 812 as I want to use flour from Germany and not abroad.

Hi Tommy, sorry for the late reply! Yes, it is quite confusing. So many articles are weird! To answer your question, I love to use type 550 flour for pizza. Never worked with 812, as I cannot find it.