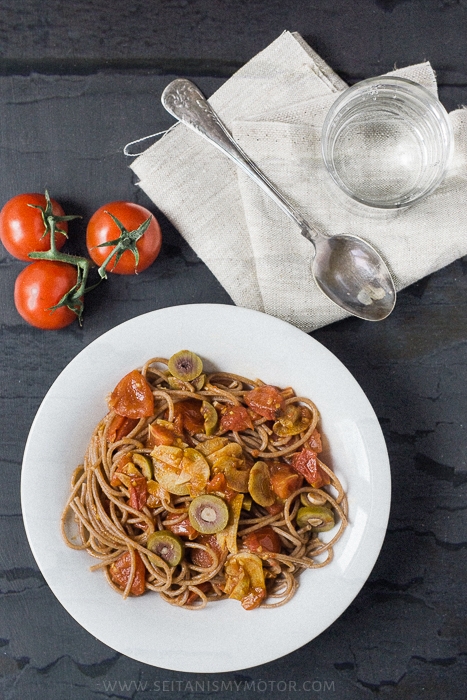 What do you eat when you have no idea what to cook? When you don’t want to cook in the first place? When you’d rather eat some bland toast instead of dragging a pot out of your cupboard? How about spaghetti with a simple tomato sauce? Made from fresh, local cherry tomatoes? With lots of garlic? And some vanilla? Yes, you read that right. A simple tomato sauce with garlic and vanilla. A fresh and moist vanilla pod cut open and fragrant seeds scraped out and mixed with garlic and oil. Vanilla with a sweet and slightly tobaccoish taste. Think about it. You still want to eat toast? No way, get that pot out!

This recipe serves one hungry person. It’s just a guideline, so adjust to your needs!

Spaghetti with Tomatoes and Vanilla (serves 1)

Place the spaghetti in boiling salt water and cook according to package directions.

In a pan, heat the oil and add garlic. Fry for 1-2 minutes or until translucent, then add tomatoes and vanilla. Cook for about 10 minutes over medium heat or until the tomatoes start to break apart.

Drain spaghetti, add to pan and mix with tomatoes and olives, if using. Or try fresh basil instead of the olives. Season with salt and pepper. 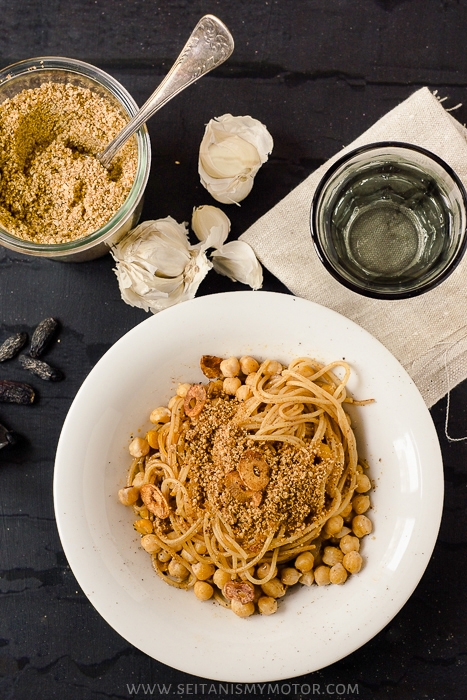 If you wanna get even fancier than this, don’t buy a vanilla pot. Buy a tonka bean instead. Tonka beans are sometimes used as a substitute for vanilla and they share certain properties with that spice and are often prepared like vanilla pods. A whole bean cooked in liquid, such as milk, adds a lot of flavour to this liquid. The smell of tonka beans is very distinctive and strong, slightly sweet and somehow reminiscent of tobacco and sweet woodruff. But the tonka bean’s taste and smell is a bit more aggressive than vanilla, which is more rounded. I personally don’t think tonka bean can be used as a substitute for vanilla as it has it’s own very special flavour.

The French name for tonka bean is coumarou. From this the term coumarin is derived. Coumarin is a chemical compound present in many foods and spices: tonka beans, sweet woodruff, cassia bark (aka cinnamon), but also strawberries, blackcurrants, and cherries. A couple of years ago around Christmas time, when cinnamon stars popped up in German stores like every year around that time, authorities warned that eating these cinnamon stars might be bad for your health. The reason was that commercially prepared cinnamon stars are often made with  cassia bark, which is a cheap substitute for Ceylon cinnamon. That substitute is very common in German spice racks and commercially prepared foods which are supposed to contain cinnamon. Cassia bark contains a lot of coumarin. Coumarin can damage some of your organs if you eat too much of it and that’s the reason why tonka beans are banned in the US. But here in crazy Europe they are still legal! They are very expensive and it’s not that we use them every day. I bet that most people haven’t even heard about this spice before. It’s mostly used in perfumes and only sometimes as a food ingredient, mostly for fancy chocolates or desserts. So I assume that it’s safe to consume a couple of tonka bean scrapes once in a while.  (If you don’t feel comfortable about this or don’t have access to a tonka bean, it’s fine to make the following recipe with vanilla, too.)

Place the spaghetti in a pot with boiling salt water and cook according to package instructions.

Heat oil in a pan and add garlic. Fry for one-2 minutes, or until translucent.

Drain spaghetti and add to the pan. Add chickpeas and mix well. Serve with almond parmesan and add salt and pepper to taste.

Heat oil in a pan and fry the almonds for 5-7 minutes, stirring often. (Alternatively you can leave out the oil and roast the almonds in the oven. Preheat the oven to 200°C (400°F). Place almonds on a baking sheet and roast for 5-8 minutes. )

Let the almonds cool to room temperature and place in a food processor. Add remaining ingredients and process until a crumbly, parmesan-like appearance is obtained. Store in an airtight container. 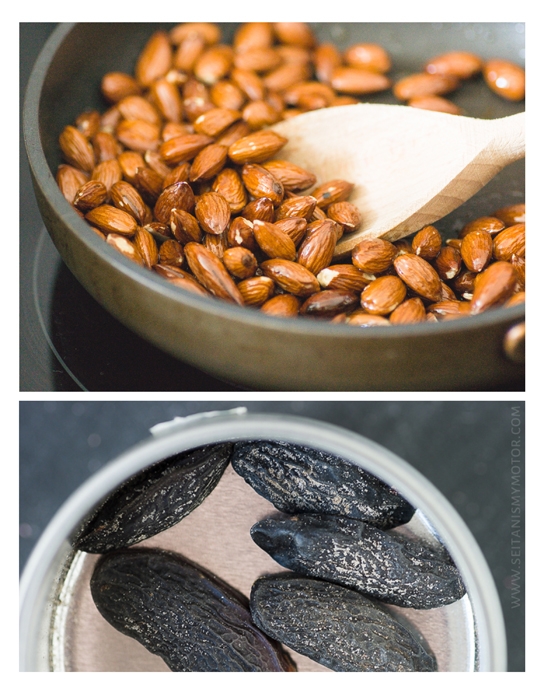 I felt like you were talking directly to me. I am having one of those days when I don’t want to cook. Thanks for the pep talk. I have to admit that I already ordered take out though. ;-)
I’m surprised that tonka beans are banned in the US, but not in Europe. Of course, I have never heard of them and that explains why. I love the combinations here. Thanks for the inspiration. I often throw together some pasta dish when I’m not sure what to make and I like interesting combinations.

Well I obviously don’t have access to tonka beans, but I’ve got a fresh vanilla pod in the pantry begging to be used in a tomato sauce. I am beyond intrigued by this idea!

Yeah, I am interested in the almond parmesan. That sounds good.

Wow, the vanilla is intriguing! I’ll have to give it a whirl :)

vanilla and tonka beans in pasta dishes sounds odd but interesting – my real interest was in the smoked almond parmesan – sounds great. Tonka beans were very popular a few years back in Australia (or at least talked about if not consumed by many) after a food cooking program used them but I haven’t tried them.

Wow, you’ve kinda blown my mind with this one! I’m definitely a little suspicious of vanilla in a savoury recipe but if you say it’s delicious I believe ya!