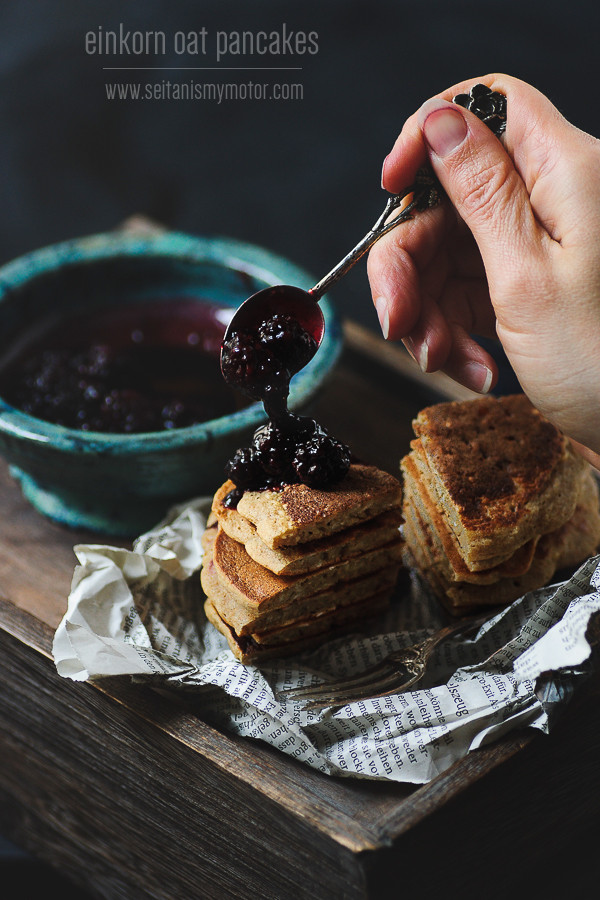 Some more thoughts on the topic of inspiration: I think I do get a lot of it from cookbooks. But it’s not the recipes that inspire me, it’s the ingredients. I realised this when I started to test for the awesome new cookbook project by Tami Noyes and Celine Steen. The Great Vegan Whole Grains Cooking Book will be available in 2016 and it’s going to be full of unique and inspiring grain recipes. Cooking recipes for this book brought me back to a phase where I used to have all kinds of grains stuffed into my pantry. That was when I bought a grain mill and made my own bread. The grain mill gave me a lot of flexibilty when it came to baking. I made whole flours not only from wheat, rye, or spelt but also from farro, oats, buckwheat, einkorn and kamut. But having all those grains around also inspired me to use them in their whole form for everyday meals. Then I stopped baking bread because I let my starter die a couple of times. I used up all the grains and went back to eating expensive and far travelled quinoa instead of cheap and local buckwheat or einkorn.

Testing recipes for Celine and Tami has been very inspiring. I restocked my pantry with whole grains and have been using them a lot not only for test recipes. I use different flours for baking again, especially for those pancakes pictured above, which a certain person in our household demands several times a week.These were made with homemade einkorn flour. The recipe will be at the end of this post. If you don’t have farro flour, you can use another whole grain flour such as wheat or spelt. Pancakes are very hard to mess up and great for experimentation!

I also remembered how much I love oat flour! It can be a bit difficult to grind because it is so soft. But that is also an advantage because you can make it from oats using your food processor.  These cookies are adapted from the Chocolate Almond Bake or No-Bake Cookies from 500 Vegan Recipes.  The original recipe calls for only a handful of ingredients and is super easy to make. I had no chocolate on hand I used 1/4 cup of oil instead and it worked like a charm. 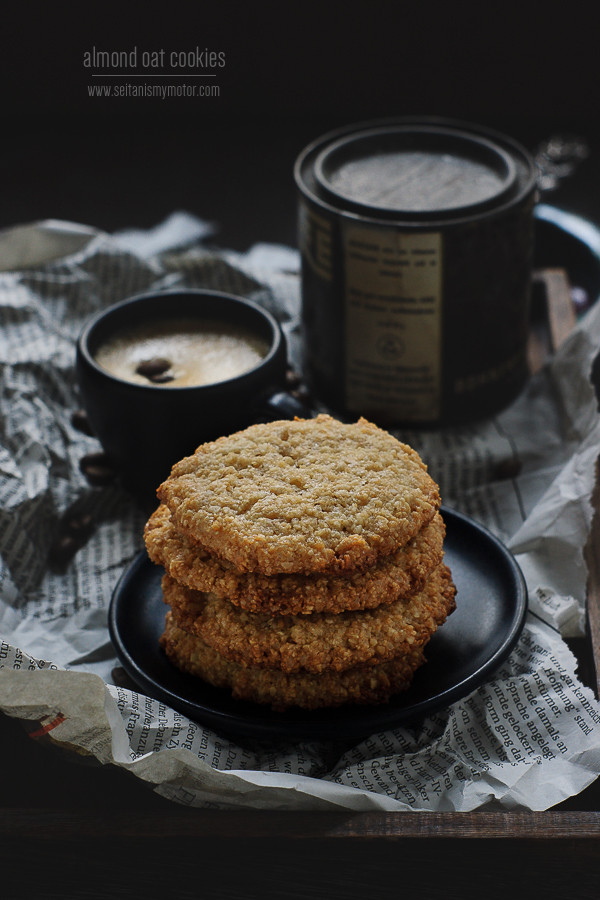 Pancakes are not the only food F is obsessed with lately. She also likes to make pizza. I know I need to stop bragging about my child here, but I think it’s pretty great that a three year old makes her own pizza. We knead the dough together and then she gets a piece to roll out and top. She can do that with no help at all. I like that she’s so interested in cooking and making her own meals. We do not demonise frozen foods or convenience products but I still think that she’ll have a lot of alternatives to frozen pizza once she has to cook for herself. I think that no matter what, knowing how to cook is a great skill to have and I am glad F is starting so early with this. It also teaches her that every family member is responsible for food preparation and she can be part of it, too. Last weekend we were home alone and F decided we should make another pizza. When we were mixing the dough from freshly ground spelt kernels I realised that we had made way to much! I guess I got carried away a bit. It didn’t matter though because leftover pizza dough makes great bread. We made mini spelt breads tossed in poppy and sesame seeds and that way we were set both for dinner and our next breakfast. 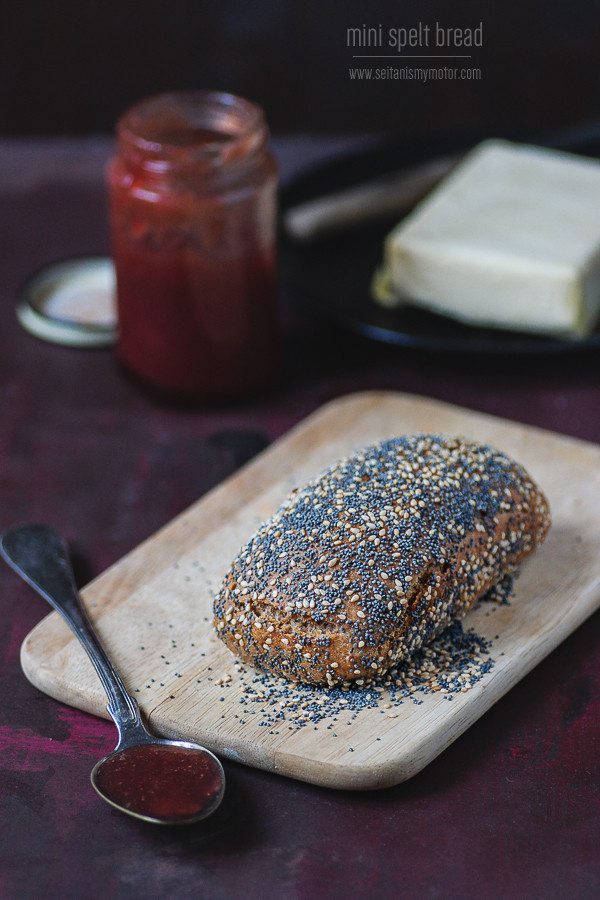 If you experiment and improvise a lot, you can sometimes find great new cooking techniques for foods you are not so wild about. For example, I was never a big fan of buckwheat. Many people like to eat it raw (for breakfast cereals) or cooked but I could never deal with its consistensy. Buckwheat doesn’t seem to absorb much liquid. If you mix it with water, it will get a texture similar to soaked flax and chia. And I am not a fan of slimey foods. So since all that didn’t work for me, I ground the raw buckwheat into a flour and tried to use it in baked goods. It’s is pretty popular with gluten-free folks and I thought I should give it another chance. But when I made my first waffles with buckwheat flour I realised that I had to combine it with many other ingredients to make its much to prominent earthy flavour go away. So after a bit of experimentation I went for a gluten-free flour mix instead, including buckwheat and other flours. The waffles I made based on that mixture were actually pretty good! But I still think that buckwheat flour is a much better ingredient for breads or other savoury baked goods than it is for sweet waffles or pancakes. And I still don’t like it cooked except for one recipe, which I really love. One time when I wanted polenta fries but was out of polenta, I cooked some buckwheat instead, processed it, and placed it in a baking dish. Once it was cooled it was very easy to slice and had exactly the consistency of cooked and cooled polenta. And it also tasted fantastic, especially when mixed with garlic. So after all that ranting here is a recipe for simple buckwheat fries that made me, the buckwheat hater, turn into a buckwheat fan. The fries are really easy to make and you can both fry and bake them. You can also store the prepared and processed buckwheat in the fridge and fry it whenever you want. The sticks make a wonderful snack but are a fantastic side dish, too. I like to combine them with stir fried bok choi and chickpeas. Oh, and don’t forget the hot sauce. 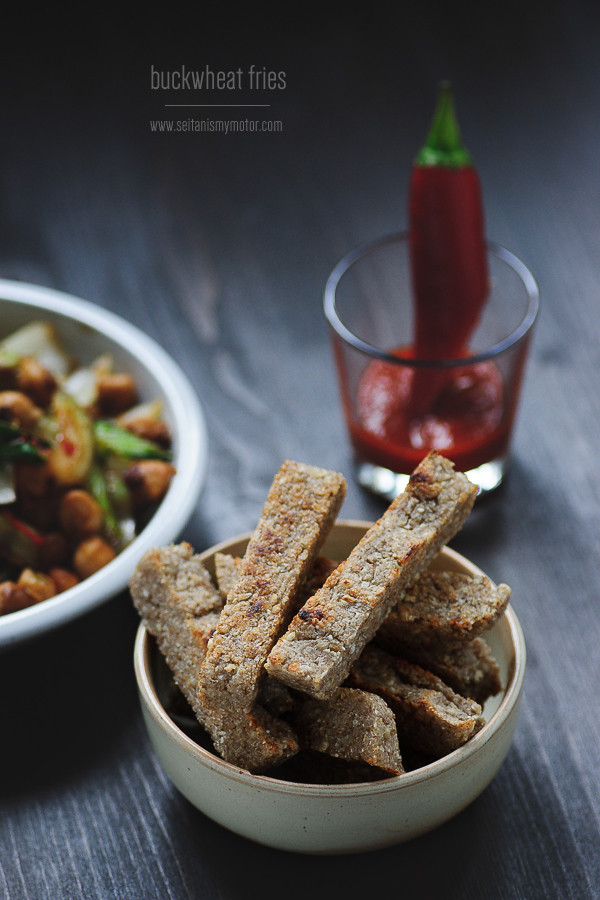 Combine buckwheat and water. Cook buckwheat cook for 10 minutes or until the water is absorbed and the buckwheat is soft. Also check your package for specific directions on cooking buckwheat.
Immediately place the hot grain in a food processor with garlic and salt and process until most of the buckwheat is finely ground. Transfer to a greased baking dish about the size of a loaf pan (Of course you can also use a greased loaf pan!) and use a spaltula to press the batter down evenly. Let cool completely.
Once cooled, cut into 1-2 cm (1/2-1 inch) thick strips.
Heat a pan and brush with oil. Fry the sticks on all sides until crispy. Add more oil if necessary. If you want to bake these, brush them with oil and bake until crispy.

Combine all pancake ingredients in a bowl and mix well. Let sit for 10 minutes.
Heat a pan over medium heat and add oil. Pour about 2-3 tablespoons of batter into the pan and fry until golden brown. Flip and cook the other side. Einkorn flour browns very fast so check often and don’t burn the pancakes.
Serve with jam or sugar.

I made the pancakes and they were really nice, I’ve been looking for a good vegan pancake recipe
Thank you!!

I went through a stage of trying lots of different flours when my sister and niece were diagnosed as celiac – however they just like plain food so my mum and my efforts were not that useful to them but it was nice to try different flours – however now I have some I use heaps and others that are totally neglected. Besan flour is probably one of my favourites – I love seeing your experiments esp as I have buckwheat that I haven’t been using – I occasionally love it and mostly shun it – making fries with it sounds really good and I have never heard of einkorn flour but them name sounds like something out of a fairy tale.

I’ll test the recipe for Buckwheat Fries immediately. Thank you.

I want to eat those buckwheat fries! I love polenta. Thank you for the great idea. Oh–and, regarding buckwheat, I enjoy it baked in granola or added to raw desserts (like in a raw nut/date pie crust–adds great texture! Crunchy, not slimy!

Buckwheat fries! These look pretty unique. They remind me of breadsticks or cheese sticks. Interesting. I have to try using buckwheat. I have yet to experiment with it…

thanks for sharing Mihl! the buckwheat fries look so interesting!! I bet they’d be great with stew.
xo
kittee

Mini Apple Crisp In A Jar. And Photography...

Kochbuchrezension: The Lotus and the Artichoke Mexico