Thank you, Vegan Month of Food, for giving me the opportunity to put another recipe with poppy seeds on my blog! Poppy seeds are blue and that is today’s Vegan MoFo promt. And I cannot tell you how much I love poppy seeds. I love them so much that I’ll scoff at those lemon poppy seed muffins you probably like, because they don’t contain more than homeopathic doses of my favourite seeds. With this Danish Poppy Seed Cake I am going for 100 % poppy seeds instead! 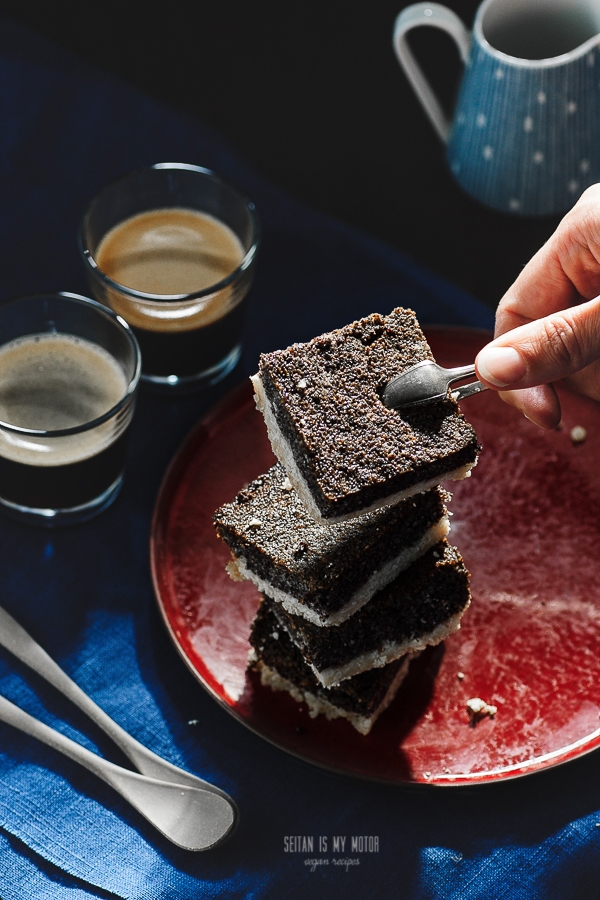 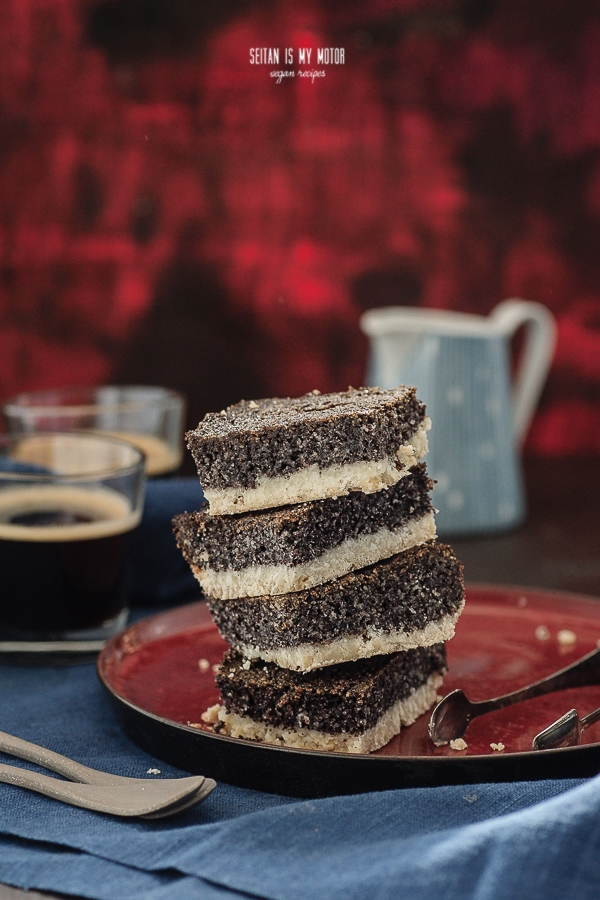 The recipe is from a Danish baking book I bought while visiting Copenhagen (maybe two years ago?). The book was bigger and heavier than a luxury edition of the bible. That and the pretty pictures lured me into buying it. Bagebog by Claus Meyer has a lot of interesting recipes, and while some of them might be considered as Danish or at least Scandinavian, most seem to be international. So I am not sure about the authenticity of this birkeskage. Something similar might be served to you in many Eastern European countries, and even in German bakeries you can find Mohnkuchen varieties. I am still calling it Danish because it’s from a Danish book written in Danish! Smart, hm? The original recipe called for 4 eggs but those were easily replaced by both soy yoghurt and aquafaba. I made some more alterations, so that new recipe doesn’t have very much to do with the original version anymore. I have never tasted the original, obviously. But my version is a wonderfully moist and aromatic poppy seed cake with a delicate shortbread crust. 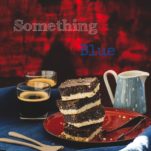 Preheat the oven to 180°C (350°F). Grease a rectangular pan (18 x 28 cm or 7 x 11 inch) and set aside.
To make the crust, beat coconut oil and sugar until light and fluffy.
Add sugar and mix until a crumbly dough forms. Make sure the fat is incorporated completely.
Press the dough into the pan and place in the fridge.
To make the topping, beat the coconut oil and 125 g sugar (1/2 cup plus 2 tablespoons) until fluffy.
Add yoghurt, poppy seeds, and semolina and beat until smooth.
Combine chickpea brine, remaining 50 g (1/4 cup) sugar, and lime juice in a second bowl.
Beat until stiff peaks form. (I use a handheld blender. It takes about 5 minutes with this one, but beating time can be longer or shorter.)
Fold the chickpea brine mixture into the poppy seed mixture until everything is smooth.
Remove the pan from the fridge and pour topping over the crust.
Smooth down the topping and bake for 45 minutes.
Remove from oven and let cool completely before serving.
This cake tastes best straight from the fridge where you can store it for several days.

Thank you for the recipe, this was the perfect treat to my poppyseed craving. I skipped the beating of the coconut oil with sugar both times, added a bit of salt and used kidney bean brine instead of chickpea. Everybody loved it!

Hello Mihl ! Yesterday I visited your website first time and here I got a recipe which looks so delicious ,yummy and amazing in pictures that I could not wait and made the birkeskage danish poppy seed cake for whole family in the dinner menu . I couldn’t express in words how delicious it was and whole family likes it very much. Every one said thanks to you for this beautiful recipe.

I love your site so much, what a brilliantly inspired name! GORGEOUS cake I’m going to try to adapt it to my ‘dietary needs’. Fab :)

Poppy seeds are blue? I guess I have never looked at them that closely before! Your vegan MoFo game is GOALS, btw. That Westfälische quarkspeise looks so amazing.

Yes, in German this kind is even called Blaumohn, blue poppy.

What a great idea to use poppy seeds as your blue food! These look totally delicious. The Quarkspeise looks gorgeous as well. I’ve never been able to get myself to really like that type of bread (maybe I just haven’t tried a variety that’s actually good) but I’m pretty sure a dessert like that would convince me. :)

do you have your own pumpernickel recipe?!

i love poppy seed cakes and this looks so good!

oh my gosh!! Thanks for sharing your recipe! After spending time in Europe, I have a strong appreciation for the glorious little poppy seed… which – as you duly noted – is totally under-represented over here. I love how dark and dense that poppy seed layer is. Bookmarked! :)

I love your blog! Everything looks so good.

All poppy all the time.

I love poppy seeds! The more the better. I wrote your recipe down in my cookbook. Love the little tongs in the first picture. I never thought pumpernickel could be a dessert like black forest cake but I see it and I want to make it too! Now I wish I hadn’t eaten all that pumpernickel/rye bread I had before.

So delicious, i love Poppy Seeds as well..I made a poppyseed strudel just yesterday=) The Cake looks amazing, i will have to try this recipe!=)

I think I have everything to make this during the weekend, except I need to check what semolina is. Is it cream of wheat? I know, I know, “let me Google it for you, Celine”.
Anyway, if you ever write the luxury edition of the poopy poppy seed bible, I’ll be first in line to buy it.

Ha, ha, usually I have to ask these questions because I never know myself. I think it is cream of wheat. My package says “durum wheat semolina” or semoule de blé dur, if that helps. It’s like polenta and you could probably use farina, if you have that or even polenta.

Oh, I’d make sure that bible would be usefull both in the poppy and poopy seed department.

and your poppy seed recipe is fantastic not just because I love poppy seeds but also because I never think of them as blue and next time I am asked for blue food I am doing poppy seed too – I used to live with some people of polish origin who were very fond of a yeasted poppy seed loaf with thick swirls of poppy seeds. I also have a poppy seed cake somewhere that has heaps of poppy seeds in it – now you have me craving poppy seed baking and a taste of your slice

Wow, what beautiful photos and amazing sounding cake. This is what I love about Mofo, discovering ideas I’d never have thought of! I’ve yet to experiment with Aqua Faba, my dislike of meringues put me off but I keep seeing it now used in allsorts of other interesting ways. I love poppy seeds too but haven’t done anything other than mixing them with lemon. I love the lemon and poppyseed loaf in the Babycakes book. I really want to try this now.

amaaaazing! I love poppy seeds and pre-vegan I used to buy this Polish poppy seed bread swirly thing that was so heavy on the poppy seed– loved it!

Apricot Cheesecake {No Baking, No Nuts}