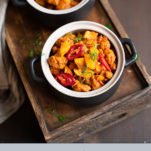 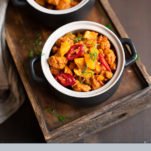 Goulash is a Hungarian dish. But it is very popular in Germany, too. Although, admittedly, most of us don’t know what goulash really is. In Hungary what Germans call goulash is a pörkölt, which means, it’s a stew. Hungarian gulyás is more like a soup. Which means that in Germany you have to ask for goulash soup if you want goulash.

This dish is a favourite childhood dish of mine. I always loved the thick paprika seasoned gravy and admittedly, the stringy beef chunks. But thankfully this is a thing of the past. I know that you do not need meat for good flavour. You can still have all your favourite comfort foods without any kind of meat.

I haven’t had goulash in a while and I didn’t think of making it during summer. Until a co-worker invited us to a camp fire. (Yay, camp fires! I hate them.) He often makes goulash (pörkölt) in a large pot and cooks it over the fire. And yes, I admit that in that case, it is really nice to sit around that smoky fire and eat a warming bowl of soup. Even though I did smell like smoked meat for the rest of the evening…

This vegan goulash recipe is very easy and very versatile. I admit it is not very authentic. It is insprired by a version my coworker makes. He told me about his recipe and this is my interpretation. I added the roasted potatoes and chose a different kind of fake meat. Usually I would add a couple more ingredients t make this dish taste richer and earthier, like red wine or mushroom broth. But I think this lighter recipe is better suited for summer.

My co-worker used store-bought tofu and soy goulash chunks. You can put all kinds of fake meat in there, but for me the easiest ingredient to use is textured vegetable protein (TVP). TVP is made from defatted soy flour. This soy flour is pressed into chunks of all sizes and can be re-hydrated with water or broth. I prefer broth as the chunks already get a lot of flavour during soaking.

I also like TVP because it is rich in protein. I know that some vegans like to claim you don’t have to pay attention to your protein intake. But I like to eat one or two protein-rich meals a day as they keep me satiated. And soya chunks really have a lot of protein. If you don’t have TVP, you could use all kinds of ingredients instead. For example mushrooms or smoked tofu.

Although goulash is often cooked in large quantities, I made this for two persons. The recipe is kid friendly, as long as you leave out the sliced fresh chili that I put on top for the picture. 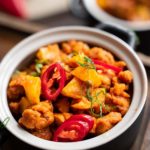 I love TVP so much, especially the chunks. I have been using them a lot over winter, there is something just so satisfying about them. I agree with using broth rather than water to reconstitute them, it gives them a great flavour boost, and then they absorb even more flavour from the stew.

Yeah, I use them a lot, too. Such a versatile ingredient!