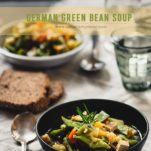 I am pretty sure that my grandmother’s Schnippelbohnensuppe was one of my favourite foods when I was a kid. (Schnippeln is a verb, it means to chop or cut up vegetables, but it sometimes also refers to cutting something with scissors.) Although I always loved green beans, I probably didn’t like this soup because it had beans. I liked it because it had sausages. My grandmother put smoked sausage (called mettwurst) in there and they contributed most of the flavour.

She often made this soup, I assume, because it was cheap. The sausages were kind of a splurge. But the rest was cheap. In German soups you will often find a couple of staple vegetables. These are carrots, potatoes, leeks, and celeriac. Celeriac really is a key ingredient with its earthy flavour. If you do not access to it, I personally would not replace it with celery stalks. I personally would recommend parsnips instead although they are a bit sweeter.

Eating meat is something I do not miss at all. It’s the combination of smoky and salty that I miss! Thankfully there are things like liquid smoke and smoked salt to stand in for the sausages I used to eat. I freely admit that I put a vegan sausage into my soups here and there, too. And I don’t get the hate that is directed at these products sometimes. Meat eaters telling me I shouldn’t eat them, vegetarians telling me I shouldn’t eat them. Even vegans who tell me this and refuse to eat “fake” meats with a passion.

For this soup, I used smoked tofu. It’s very easy to get here in Germany. I have often found it it grocery stores in small villages without any problems. Also, tofu is usually much cheaper than packaged sausages and that’s always a good thing, right? If you want, you can buy your favourite vegan sausage that has a smoky flavour. Or you can make these gluten based sausages. (Leave out the maple if you like. I always leave out the maple syrup.) 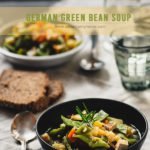 oh wow, your pictures are just getting more and more and more beautiful every day. I love greenbeans so much, and I eat them all. the. time. I love the idea of green bean soup!! Especially with a little touch of smokey goodness. :)

Ooooh, this looks lovely. I think we’re still getting runner beans at the farmers markets, so I can give this a try soon!

That would be awesome! And I love your blog name!!!

I love some of the arguments from omni-eaters about the fake meat situation. My favorite that they are processed, which if that person really truly eats nothing mass produced and not heavily processed, I might take the criticizm better. My sister snears at my vegan pies since I use fake butter, but she happily buys the pre-made pie crusts. What the heck? Some of those are technically vegan!

I think most meat eaters have a hard time not eating something voluntarily that you like. There are lots vegetarians and vegans that I know that are revolted by meat and cheese. So people tend to assume that you would only give up meat if you found it disgusting. Also in the US, I know lots of little kids who don’t like meat, so they are kind-of vegetarian so that re-enforces the stereotype.

I never really liked most meats and always hated milk. I love the vegan alternatives to these things though and couldn’t live without soy milk. I am glad I gave it a try. I agree that the processed food hate isn’t really an argument if you only apply it to certain foods.

This looks wonderful, love the savory and smokey flavor combination and perfect for winter. Thanks!

Oh, yes! Good point about the fat. That makes a big difference, too.

This looks lovely and simple and comforting! I’m with you, I couldn’t live without the smoky and salty combination. I’m also all for eating the occasional vegan sausage or mock meat. I don’t get the arguments against it – I never liked meat, even as a child, but I enjoy the different textures that mock meats offer! I only eat them occasionally, and what of it?!

Maultaschen with Spinach and Smoked Tofu