Every year, I love rhubarb more and more. I try it in new recipes and with different preparation methods. Like this rhubarb ice cream made with aquafaba.

Last year, when my father visited us in Dresden, he brought a box of strawberries from a grocery store around the corner. “Those aren’t good. You should not buy them,” I said. He tasted a berry and replied that they weren’t too bad. “But they are terrible compared to those we can get at home in our village!” I guess ten kilograms of childhood memories came out with that sentence. When we were children my dad would buy fresh strawberries on Sundays. Sometimes we helped him wash and slice them, sometimes he would even let us whip the cream. Nothing was better than those fresh strawberries. We ate them straight from the plant if we got the chance. For example during our bike rides, when we picked some at the edge of a field. Or when we emptied the patches in our neighbour’s garden. All these memories came back when I told my father that the strawberries here in the city weren’t good. He disagreed. He told me that the fruits back home weren’t that much better anymore. He even thought they were worse. I didn’t believe a word of what he said. That simply couldn’t be true.

During this years Pentecost vacation F and I made a trip to my parents’ place. My father picked us up from the main station in Bremen. On our car ride to my parents’ village, we drove by several strawberry fields. I got exited and mentioned something about eating them for breakfast every day. My father said I should probably find something else to eat. They had changed the breed a couple of years ago, he elaborated. Those berries weren’t worth the trouble anymore. Yes, they kept well but most of the flavour was gone. Why would he say that? Some weird berry conspiracy theory? Did he not remember how we all loved to eat strawberries together? That he always would pick them up for us? The next day F and I prepared lunch. Suddenly my father stepped into the kitchen with a box of strawberries in his hand. I smiled. I told F that this would make such a wonderful dessert. Then I looked at the strawberries. They looked very pale. I  asked my father, “Why did you bring these? Were the good ones sold out?” “No,” he replied. “They do all look like that now. I thought that if you tasted them you would finally believe me.” I was still in denial. I gave one to my daughter. “Taste it! The best strawberries you can get.” She tasted and then looked at me disgusted. I said: “But those are good.” It wasn’t true. I didn’t believe what I just said. I think I just wanted to share an important childhood memory with my daughter. But there was nothing to share. I was disappointed and those strawberries were just pale, sour, and watery.

Okay, okay. Maybe this is all in my head. Maybe I am turning into one of these “everything was better in the old days” person now. Or maybe it was just the beginning of the season and I need to give those strawberries some more time to grow. There are other childhood memories to share or to improve. Like my relationship with rhubarb. This vegetable/fruit was something I mostly ignored when I was a kid. At least when it came to baked goods.  Our neighbours made tons of rhubarb cakes and many grown ups tried to trick me into liking it. They pretended it was great in desserts. They pretended it was sweet. But it wasn’t. There was never enough sugar in those cakes and a kilogram of whipped cream could not change that. Back then I thought those neighbours wanted us to give up our sweet tooth. But that wasn’t true. Nobody tricked us. Rhubarb was something we did not appreciate very much.  We spent our afternoons stuffing our face with strawberries instead. 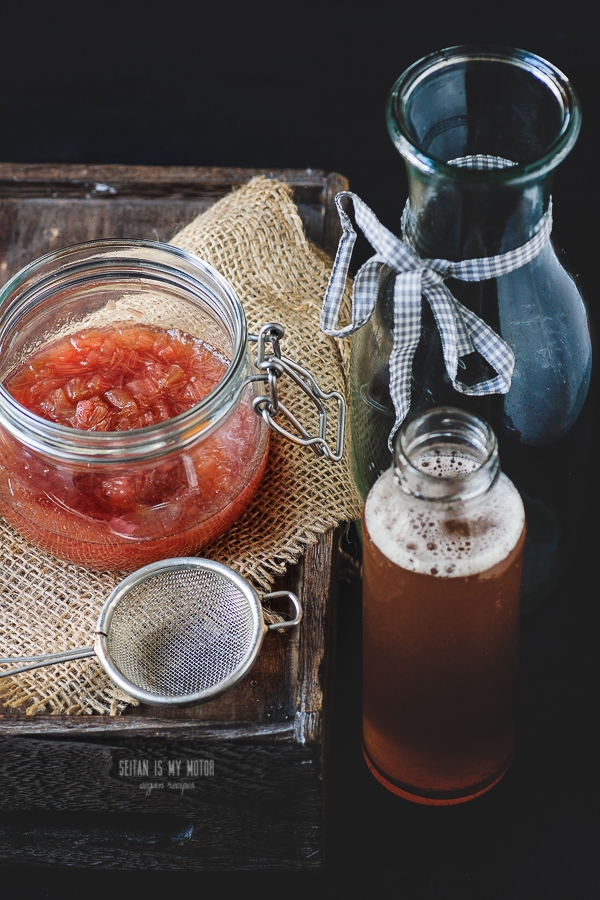 Now that those strawberries are disenchanted I can finally appreciate the tartness of rhubarb. It’s now my daughter who refuses to eat it. But you can make very sugary things from rhubarb, too. Sugar can be used as a preservative, for example in jams. Or syrups.They are very simple to make and they can be kept in the fridge for 1 or 2 weeks. I made a batch for my ice cream recipe, but it’s also a base for refreshing lemonade. (Simply dillute it with (sparkling) water.) If you want something tarter, rhubarb compote is a great choice, depending on how much sugar you add. For my ice cream I didn’t use too much sugar, but if you want to pair the compote with oatmeal or grießpudding, you can double the amount of sugar used. Just adjust it to your taste. 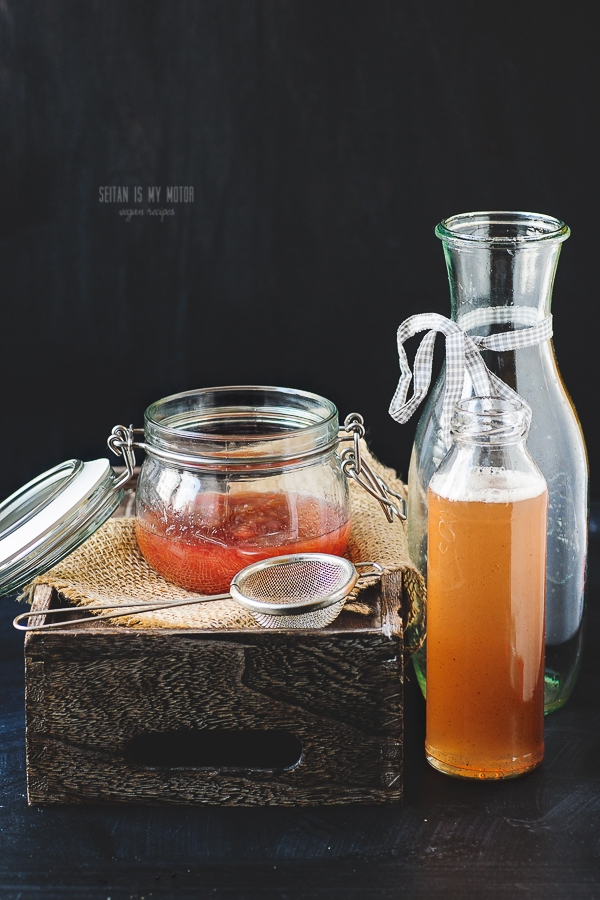 There are a couple of wonderful methods to make vegan ice cream, but I like to try something new from time to time. I admit it’s definitely not the easiest and fastest method to make ice cream. But I’ll also talk about a couple of  shortcuts in a minute. This version calls for whipped chickpea brine (called aquafaba), which improves the texture a lot and makes the ice cream light and easy to scoop. In fact, even after over a week in the freezer, this batch still had a consistency similar to soft serve. Since we’re  without an ice cream machine right now, I used my blender method for this recipe. That is a bit involved, but it will produce similar results to ice cream from a machine.

If you thing this all sounds to complicated, I have a couple of ideas for you: You can leave out the aquafaba and make this into a “regular” coconut based ice cream. You can also use an ice cream machine, if you have one. If you wanto to use a machine and include the whipped aquafaba, churn the coconut milk and syrup mixture  and fold in the whipped chickpea liquid once the machine is done. Then proceed to freeze it, add the compote, and freeze until solid. If you don’t have an ice cream machine or a blender, make a simple semifreddo by combining the coconut milk and syrup mixture and the compote. Pour it into a container and freeze it until solid. Instead of scooping it out, you can slice it for serving. Another tip is to split up the workload and prepare both the syrup and the compote a day in advance.

To make the syrup, combine sliced rhubarb and water in a small pot.

Bring to a boil and cook until the rhubarb falls apart, about 5-10 minutes.

Strain the liquid through a fine sieve and pour back into the (cleaned!) pot. (Discard the rhubarb pulp left in the sieve.)

Boil for 10 minutes and make sure the mixture doesn't boil over.

Let cool and pour into a sterilized jar. (Store leftovers in the fridge for up to two weeks.)

To make the compote, combine rhubarb and sugar in a small pot and bring to a boil.

Cook until the rhubarb falls apart.

Set aside and let cool completely.

To make the ice cream, combine coconut milk, oil, and sugar in a bowl and whisk. Add syrup and whisk again.

Transfer to a shallow container such as a brownie pan and place in the freezer.

Freeze for 2-3 hours, or until mostly solid.

Once the coconut milk mixture is frozen, combine the chickpea brine and the remaining sugar.

Whip the mixture with a hand held mixer or in a stand mixer until very stiff. This may take up to 10 minutes. You can add a splash of lemon juice to speed up the process.

Cut the frozen coconut milk mixture into smaller pieces and transfer to a high speed blender.

Blend until it has the consistency of soft serve.

Pour into the chickpea fluff and fold the fluff into the coconut mixture until everything is smooth. Make sure to do this slowly and carefully. You don't want the chickpea foam to collapse too much.

Pour into a container and freeze for another 2-3 hours.

Fold in the rhubarb compote and freeze until solid.

Thank you for this amazing ice cream version, I have made it yesterday evening for a friend’s visit today and she loved it though she is otherwise not a friend of rhubarb. It was my first time using the aquafaba but though I followed all your steps, mine didn’t go crazy fluffy – but it tasted damn good on its own. I loved it also but would like to ask if you might know – would less sugar in the syrup and compote change the consistency of the ice cream? It was a bit too sweet for my liking (but I did eat full cup of it anyway!).
Once more, thank you for sharing this one and all other great recipes with the world!
Silvia

Sugar has a lot of influence on the consistency but I think you can reduce it. Maybe the ice cream will not be scoopable as easy though.

Oh dear. I am also turning into one of these “everything was better in the old days” person now. Strawberries used to be so much tastier. Now they are waxy and bland and weird and hard. I’d like to grow my own, but I tend to kill everything that I plant.

The ice cream looks amazing! I have not tried making ice cream with chickpea brine, but I am very curious now. I usually add a bit of vodka to my ice creams to keep them from freezing too hard, but I’d rather use aquafaba. Thanks for the recipe!

Waxy, that is exactly the right word. I wish I could grow my own, too. We don’t have a garden. This year I tried to grow a tomato on the window sill. It stood outside. One day it was gone. I looked down on the pavement and there it was. I hope the damn thing didn’t hurt anyone.

I’ve got this in the freezer right now! Can’t wait to try it :)

Awesome! Please let me know what you think.

It is seriously delicious!! But then you are the queen of rhubarb! I have only ever made icecream using a machine so it was great to see how easily the texture could be replicated without. I added a tablespoon of rhubarb vodka to minimise the iciness even more. It is quite an involved recipe but I just made it over the course of the day whilst I was revising for an exam! Thank you for such a delicious recipe!

Thank you for your feedback! I am glad you liked it. Rhubarb vodka sounds great! Did you make that yourself?
And I agree, this kind of recipe is perfect for exam days, when you need a break from time to time. That’s kind of when I come up with these things:)

I did make the vodka :) I simply took a pound of rhubarb chopped it into small pieces and put it into a mason jar then covered it with vodka. I think I left it in there for about two weeks giving it a shake once a day. Then I mixed in a double concentrate simple syrup to taste. Its really good!

That sounds lovely! Thank you for sharing.

sorry to hear that strawberries aren’t what they used to be but happy to hear you are embracing rhubarb – I loved both when I was young but now probably prefer rhubarb – though we do get some great strawberries from farmers markets! I am really interested to hear how you make the ice cream with aquafaba – made my first aquafaba meringues last week and they were amazing